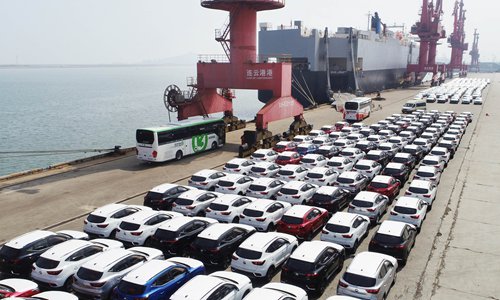 Vehicles to be shipped abroad are lined up at a port in Lianyungang, East China's Jiangsu Province, on July 31. (Photo: IC)

As the US continues to pursue protectionist measures, countries such as China, South Korea and Japan are accelerating free trade agreement (FTA) negotiations in a bid to counter the US and protect the global free trade order.

The chaos and anxiety brought to the global economy by the unilateral US moves have also created a rare opportunity for slow or even stalled FTA talks to pick up pace and these agreements could sideline the US, analysts noted.

At a forum in Beijing on Wednesday, officials from China, Japan and South Korea vowed to speed up negotiations for a trilateral FTA, which has seen slow progress so far due to political and economic differences among the three countries.

Addressing the forum, Kim Jeongil, director general of the FTA Policy Bureau at South Korea's Ministry of Trade, Industry and Energy, said that the world is witnessing growing trade protectionism, which creates urgency for completing talks on the China-Japan-South Korea FTA and other multilateral trade pacts.

"By strengthening the economic integration among the three countries as well as in the Asia-Pacific region, we will give a very positive signal to other parts of the world and show why free trade is so important and why it is so beneficial," Kim told the Global Times in an interview.

While officials from the three countries largely steered clear of mentioning the US at the forum, they argued that regional and multilateral trade agreements are now more important than ever.

"China, Japan and South Korea are all victims of protectionist actions from the US. Although the level of damage for these counties varies, there is growing urgency to make substantial progress in the FTA negotiations," Zhao Jinping, a research fellow at the Development Research Center of the State Council, China's cabinet, told the forum.

Negotiations for the China-Japan-South Korea FTA first started in 2012, but progress has been slow, partly because of sometimes tense diplomatic relations among the three countries and the competitive nature of their economies, analysts said.

But talks have picked up this year amid the growing trade aggression from the US. In May, leaders of the three countries held a trilateral summit in Tokyo, vowing to make greater efforts to accelerate the FTA negotiations.

"We are committed to building an open world economy. We recognize the importance of free and open trade and investment in achieving growth. We remain committed to liberalizing our economies and fighting all forms of protectionism," read a joint declaration following the summit, in a clear rebuttal of the US' position.

Chen Zilei, director of the Research Center for Japanese Economics at the Shanghai University of International Business and Economics, said that accelerating the trilateral FTA is not a direct countermeasure against the US, given that South Korea and Japan are close allies of the US, but it is a stance the countries feel they must take.

"With the US threatening the global free trade system, all the countries need to expand their trade reach, even when there are political differences and disagreements on economic policies," Chen told the Global Times.

As well as the China-Japan-South Korea FTA, other regional trade pacts have also seen accelerated negotiations in recent months, including the Regional Comprehensive Economic Partnership, a trade pact among 16 Asian economies.

Officials have said that they are aiming to complete negotiations for the pact before the end of 2018.

Various countries are also pursuing bilateral trade deals. China is accelerating FTA talks with countries and regions such as the EU and New Zealand, while Japan has recently signed a trade agreement with the EU.

"This is the bright side of the US trade protectionism. It has pushed all these countries to accelerate FTA talks and try to set up a firewall against the US actions," Chen said.