With Shanghai enforcing its strictest-ever garbage management regulations and some other megacities like Beijing and Shenzhen poised to follow suit, more residents are getting concerned about trash sorting. 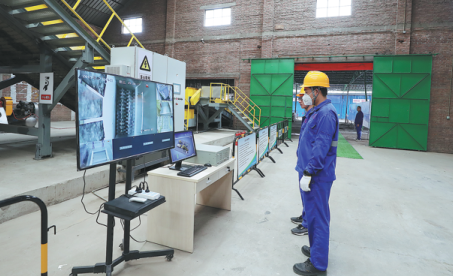 But the anxiety of the residents in Beijing's Chaoyang district is relatively mild, thanks to proactive measures.

The district encourages and guides residents to sort waste with innovative measures, including setting up intelligent trash bins, as well as implementing reward points and credits exchange, according to Lan Peng, deputy director of the Chaoyang district commission of urban management.

Bailing Jiayuan - a residential community located on the outskirts of the district - has more than 80 percent of its residents participating in trash sorting, according to a local official.

Since the community implemented smart waste sorting in January, trash bins with weighing functions have been set up throughout all corners of the neighborhood.

With different categories, including discarded plastic, metal, paper and glass, the smart bins allow the residents to scan a QR code to accurately dispose of the recyclable garbage and receive the credits.

Residents can also get credits by sorting kitchen waste and dumping it into the proper bins, said local officials. Credits can be exchanged for daily necessities, including cooking oil, soap and shampoo.

Bailing Jiayuan has also set up a 15-square-meter stacking area for bulk and construction waste, including old sofas, mattresses and wardrobes.

According to Lan, Chaoyang district has established 357 such stacking places for bulk waste, aiming to solve the problem of huddling large pieces of waste in the community and helping to recycle renewable resources.

After first publicizing trash sorting more than eight years ago, Jinsong No 5 Community is one of the first garbage sorting demonstration zones in Chaoyang district to make great strides in waste sorting.

"With sorting the waste and dumping the sorted garbage separately, one of the most obvious changes is that there are much fewer mosquitoes and worms in our community," said 69-year-old Chen Hongyu, who is among the first participants in the community to begin trash sorting.