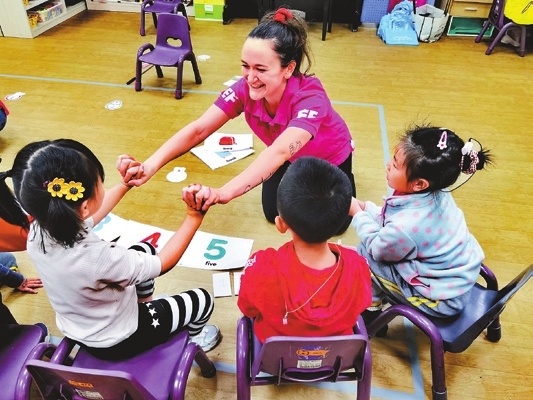 Hearing-impaired children at Shenzhen Early Intervention Center for Children With Special Needs in Futian District were seen learning numbers in English from foreign teachers with English First (EF) yesterday, ahead of this year’s World Hearing Day, which is observed today.

Each week, EF teachers come to the center to deliver free English lessons to hearing-impaired children to help them receive language training.

Jessica Guest from the United States has participated in the charity program many times. She said that the program gives her a chance to volunteer in the community. “Being a foreign teacher, I felt that lots of people have helped me adapt to living in Shenzhen, so it is important for me to give back in some ways to the community. Coming here to teach kids is a good way to do that,” Guest said.

Another EF teacher named Paul Chan appreciated the program because he can see results that students are able to join public schools quickly with their help.

As of now, it is said that a total of 119 EF teachers have joined the program in Shenzhen. They have worked 863 volunteer hours for this great cause.

Catherine Yang, executive vice president of EF Kids & Teens Corporate Affairs, said that the best time for hearing-impaired children to learn languages is before 6 years old and that EF is happy to help children in Shenzhen plus other cities such as Beijing and Shanghai enjoy equal education opportunities.

A staffer with the early intervention center, surnamed Zhang, said that they want to help children with hearing impairment not only speak normally but also achieve a comprehensive development.

In order to achieve this, Zhang said that the center also provides kids with other lessons including dancing, painting, music and Montessori classes, in addition to the English learning program.

Early intervention is very important for kids with impaired hearing to later study with normal children at public schools, according to Zhang.

Statistics suggested that with a better screening of newborn babies, most kids with an impaired hearing in China can now receive timely intervention.