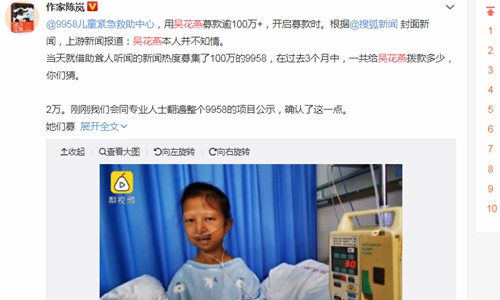 Along with the development of online money-raising platforms, targeted aid has become increasingly popular in China. However, the behavior gained attention recently after a Chinese charity program was revealed to have allegedly raised 1 million yuan ($145,000) for a seriously sick girl but only gave her 20,000 yuan. The girl died on Monday.

The program, called "9958," is an aid platform for children under the China Charities Aid Foundation for Children (CCAFC). It started to raise money through online platforms for a malnourished college girl named Wu Huayan from Southwest China's Guizhou Province after she was hospitalized in October 2019 for a serious heart valve damage.

Wu, 24, was in the news last year when it was reported that she was just 135 centimeters tall and 21.5 kilograms in weight. She died on Monday.

However, a public welfare activist named Chen Lan accused the platform for only giving Wu 20,000 yuan for treatment while raising a total of 1 million yuan on China's Twitter-like Sina Weibo on Tuesday.

"She could have received the best treatment in China," Chen said in a Weibo post.

Chen gave four examples which showed the platform continued to raise money for deceased children for years until media reported on them in 2018.

Chen's post triggered heated discussions on social media, with many netizens questioning the way the platform was using the money, and criticized it for making use of recipients' miserable stories and donors' kindness to make money.

"I am really angry…I cannot believe this is what a charity foundation did!" said a Weibo user who claimed to have been donating money through 9958 for years.

Experts are questioning the legitimacy of charity foundations raising money for targeted people, which is rising in China as online money-raising platforms develop.

Unlike previous methods of raising money for a program for specific kinds of people, a particular target and a touching story are more likely to inspire donors' compassion and bring about greater satisfaction, Jin Jinping, a professor at the Beijing University Law School and director of the Nonprofit Organizations Law Center, told the Global Times on Wednesday.

But the behavior violates the definition of public welfare as it is aimed at the interests of a specific person rather than the public, Jin said, noting that the behavior could lead to various problems, including misuse of personal information, unfairness and misguiding donators.

Media reported that 400,000 of the 1 million yuan was raised without informing Wu and her family.

In an interview with the China Central Television in December, Wu complained that some media exaggerated her story, describing her life as too miserable, which pressured her as many people, including local governmental officials, teachers and friends helped her.

The CCAFC released a statement on Tuesday on Weibo claiming that it was under Wu and her family's agreement that 9958 would transmit only 20,000 yuan to the hospital as the former wanted to set aside the rest for surgery and recovery.

On the same day, the 9958 program updated a money-raising project opened on October 29 for Wu on WeChat, claiming that the local government had agreed to set aside the rest of the money for succeeding treatment. But local government officials denied the claim with media saying they would not interfere in the money as it a private matter.

According to media, Wu could not be operated on before the doctors made a proper diagnosis. Doctors believed she suffered from Hutchinson-Gilford Progeria syndrome (HGPS).

HGPS, or progeria, is a rare, fatal, genetic childhood condition resembling premature aging, according to the Progeria Research Foundation.

Wu donated her body to a local hospital for research.

"It's a tactic 9958 usually used to receive money. They often targeted patients in serious condition, from poor families and poorly educated who would not track and question the donation," Zheng Hehong, a public welfare activist, told media.

Liu Youping, a deputy head of the China Charity and Donation Information Center, called for stronger governmental management and standards on the charity industry.

"Charity should not be an industry just based on enthusiasm. Basic norms should also be established and followed," Liu noted.