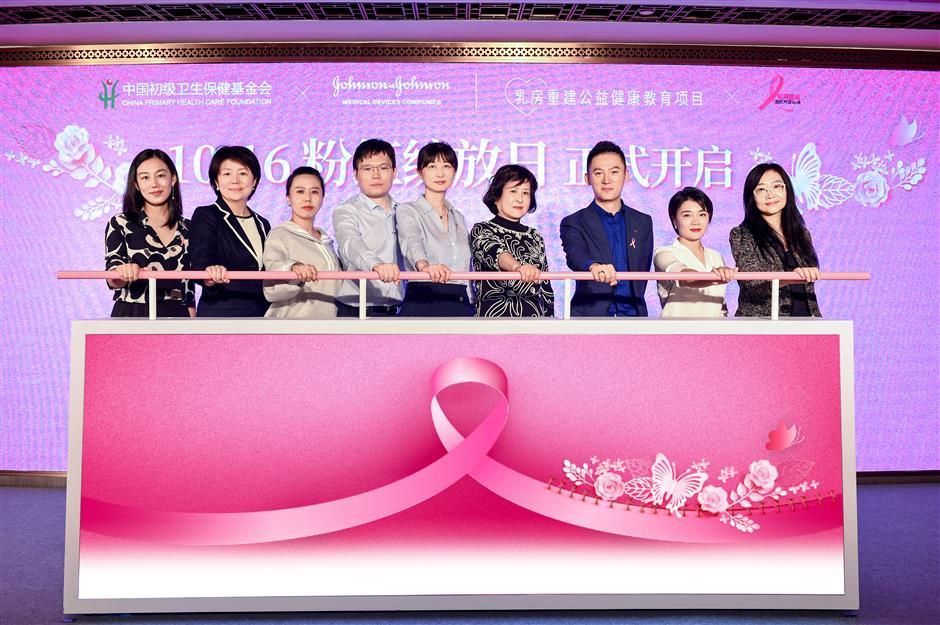 Patients, doctors, government officials and celebrities gathered in Shanghai to launch a charity program for patients having had breast cancer surgery. (Photo: Shine.com)

A charity program for breast cancer patients was launched in Shanghai on Friday by the China Primary Health Care Foundation.

Patients, doctors, government officials and celebrities gathered in Shanghai with the aim of raising awareness of breast health and support for after-surgery breast reconstruction.

There are around 304,000 women diagnosed with breast cancer in China every year. It is the top cancer for Chinese women and has a five-year survival rate of 83.2 percent.

Research found that 97.5 percent of women feel depressed after surgery and 93.3 percent feel ashamed due to the loss of their breasts.

“Returning to normal life is extremely important for after-surgery patients. A survey of 110 domestic hospitals found only 10 percent of patients had breast reconstruction, while it is 40 percent in developed countries,” said Dr Yin Jian of Tianjin Cancer Hospital. “The high incidence of breast cancer and low breast reconstruction rate made many patients live under pressure of loss of breasts, suffering strong psychological and physical pressure.”

Stefan Chen, of Johnson & Johnson Medical China, said many patients who received a mastectomy were not aware of breast reconstruction and missed out of the best opportunity for it. They felt pity for having incomplete breasts for many years after surgery and have difficulty in returning to their life. "Breast reconstruction is a mature and scientific solution testified and confirmed by a large number of research and practice in the world,” he said.

“Both doctors and patients in China don’t have enough awareness of breast reconstruction and it is also a tough technology which requires talent training and multidisciplinary cooperation,” said Dr Yin. “Breast reconstruction can not only help patients regain their body shape but also improve their mental status and quality of life. Wider clinical research confirms that breast reconstruction doesn’t influence after-surgery treatment or increase the risk of relapse.”

The foundation will promote public education in Shanghai, Guangzhou, Xi’an and Chongqing as well as training doctors in breast reconstruction and breast cancer treatment.