BEIJING, Jan. 15 (Xinhua) -- China was home to 5,355 registered charity organizations as of Jan. 11, 2019, according to Gao Xiaobing, vice minister of civil affairs Tuesday. 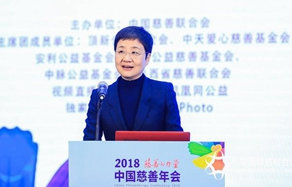 The number has more than doubled compared with September 2017, when only 2,142 such organizations were registered at civil affairs departments in the country.

In the first half of 2018, the country saw 3.57 billion participations in online charity campaigns, Gao said at an annual charity conference in Beijing.

Charity work in China has flourished in recent years. According to a report released by China Charity Alliance in September last year, China has received donations amounting to about 149.9 billion yuan (22.1 billion U.S. dollars) in 2017, a 7.68 percent increase year on year.

Chinese charity groups can play a bigger role in 2019 as the country plans to lift 10 million rural residents above the poverty line, Gao said.