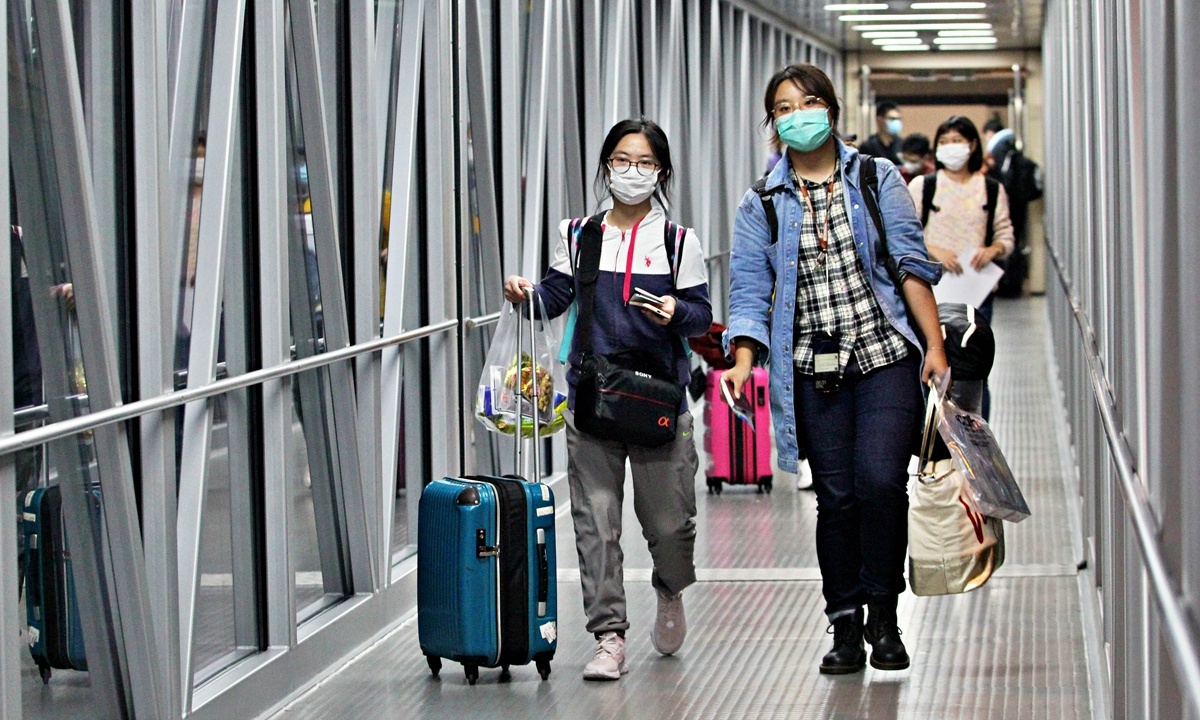 Market demand for flights between China and the US is up after the US government has moved to loosen restrictions on international students entering the country from August. Charter flight is also becoming an option for international travelers amid rising demand and surging fares.

Deer Jet, a business aviation division of HNA Group has launched a back-to-school charter program to the US, departing from Beijing to New York, Seattle, Boston and Los Angeles, with ticket prices starting from 160,000 yuan ($24,682) per person.

A representative from the company surnamed Qi told the Global Times on Wednesday that a seat of a chartered flight offers access to business jet terminals, VIP lounge and other exclusive services.

A member surnamed Zhang of iFlyPlus, a Chinese platform for international chartered flights told the Global Times on Wednesday that economy tickets to the US with transfer flight have risen to 30,000 yuan a seat, with business class seats selling at around 100,000 yuan.

He said he checked the price at iFlyPlus, which is 1.4 million yuan for a 14-seat direct flight with Gulfstream G550 from Shanghai to Los Angeles in late August, can work out at around 100,000 yuan per seat for a full flight.

"I don't need to line at the airport or share a plane with strangers, so private jets have far exceeded the business class level of service of large flights in safety and cost performance, making it a better way for Chinese students to travel back to school amid the pandemic," he said.

Data from iFlyPlus showed that the number of chartered flights inquiries from Shanghai to New York in the third quarter grew 133 percent compared with the previous quarter, and that for Shenzhen flights to London, it increased 89 percent.

Flights in Europe and US have been on the rise, especially with overseas new semesters beginning in August. China's overseas flights, and in particular chartered routes to the US have seen a spike in interest, a manager said.

The demand of flights to US is peaking as the US relaxes restrictions on international students entering the country from August 1. Students with F/M visas will no longer face strict travel bans, allowing them to travel back from China without a 14-day layover in a third country. 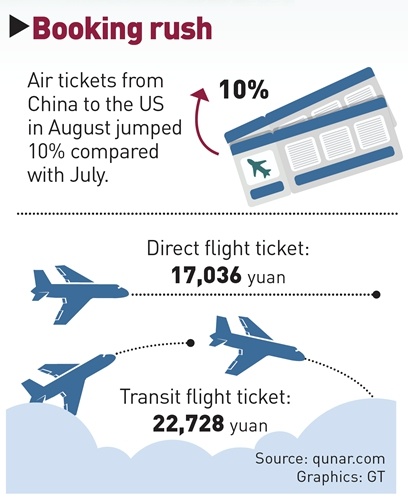 Media reports claimed that Chinese students queued up at Shanghai Pudong International Airport to check in for their flights to US, with lines as long as 1,000 meters.

Currently, when applying for the boarding pass to study in US, in addition to presenting air ticket itinerary and passport visa, students need nucleic acid test results in Chinese and English, a health declaration letter as well as recent travel medical report for entry and exit. The bulk of the students also check more than two pieces of luggage, and have to keep a certain distance from other passengers, stretching out check-in times.

Meanwhile, due to the temporary closure of Nanjing Lukou airport after a local outbreak of COVID-19 infections there, all international flights from Nanjing have been suspended, and passengers who originally chose to fly abroad from Nanjing are typically transferred to Pudong for departure.

The restrained supply of China-US flight routes has contributed to soaring ticket prices. The price of air tickets to the US increased by 10-15 percent in August compared with July, for direct flight tickets are cheaper, data from qunar.com sent to the Global Times showed. In August, the average price of a one-way transfer ticket to the US on the qunar.com was 22,728 yuan, while the one-way direct flight was 17,036 yuan, 30 percent higher than one-way direct flight.

Hong Kong-based Cathay Pacific Airways told the Global Times that the current demand for flights to US from Beijing and Shanghai via Hong Kong has risen considerably. Airport check-in times and queues have been growing as each passenger is required to provide more pre-check information due to the ongoing pandemic.

Also, students in particular are being seen off at the airport by extended family, adding to congestion.

A student surnamed Li told the Global Times that she bought a ticket of Delta Air Lines, spending 25,000 yuan from Shanghai to Los Angeles. "I had to go to US no matter how expensive the airfare was, because I had already paid my tuition fees," Li said.

"I have asked people who specialize in securing tickets to help me buy the ticket because thousands of people are fighting for a single plane seat," another student told the Global Times on condition of anonymity.

Over the past week, from August 9 to 15, a total of 42 direct flights flew from the Chinese mainland to the US, with data from FlightMaster revealing Beijing, Guangzhou and Shanghai were the main departure points.

It is expected that by the second half of 2021, international market demand for flight seats may recover to only 34 percent of 2019 levels, while domestic flights are running at 96 percent, thanks to China's efforts to largely contain the COVID-19 outbreaks.