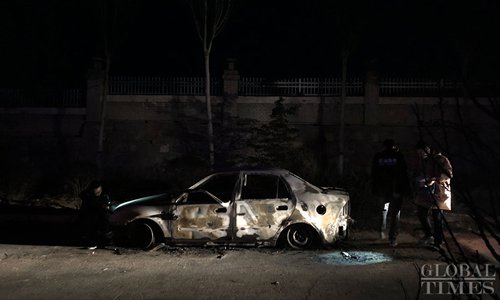 Pictured is the blast scene from the Zhangjiakou explosion which killed at least 22 on Wednesday morning. According to a preliminary investigation, the blast occurred when a vehicle carrying dangerous chemicals exploded and ignited nearby vehicles. (Photo: Global Times)

A chemical company in North China's Hebei Province allegedly hid information and misled the investigation of a blast that killed 24 and injured 21 in November 2018, local authorities said Sunday.

The report said the explosion occurred after a leak of vinyl chloride from the company's facility. The company failed to examine and maintain the facility, which caused the leak, the report said.

Vinyl chloride is a highly flammable, explosive and toxic chemical.

Thirty-eight trucks and 12 vehicles were destroyed in the blast. The explosion caused over 41.48 million yuan ($7.17 million) in damage, said the report.

Public security officials detained 12 company staff, including the firm's Party chief and general-manager, after the incident. Party and government officials from Zhangjiakou, including those from the city's work safety watchdog and public security departments, also received a warning.

The investigating team recommended a 9.49 million yuan fine on the company. Shenghua is a subsidiary of China National Chemical Cooperation, or Chem China. It has over 1,300 employees.