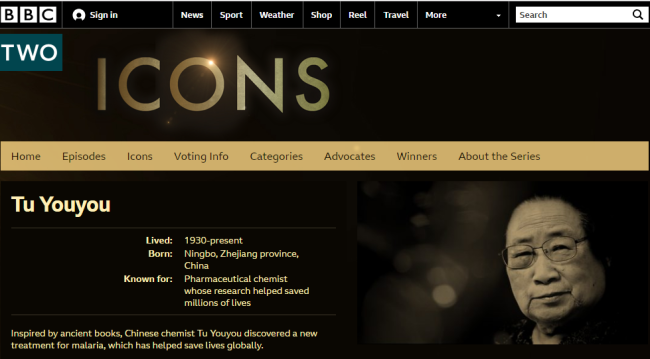 The Chinese pharmaceutical chemist Tu Youyou has been nominated by the BBC as one of the most influential scientific figures of the 20th century, alongside Marie Curie, Alan Turing, and Albert Einstein.

Tu Youyou was the only living nominee representing the field of science. The 88-year-old researcher is China's first female Nobel laureate, and is lorded for her discovery of a new treatment for malaria, which has helped save lives around the world.

Twenty eight nominees across seven categories – leaders, explorers, scientists, entertainers, activists, sports stars, artists, and writers – were selected by the BBC for its program "Icons". The top spot in the science category went to Alan Turing, the English mathematician widely regarded as a father of computer science and artificial intelligence.

The ultimate icon will be chosen from the finalists from the seven categories. The winner will be announced during a live telecast on February 5.