CHINA Chengdu building itself as capital of cuteness with panda-themed hotpot, boulevards

Chengdu building itself as capital of cuteness with panda-themed hotpot, boulevards 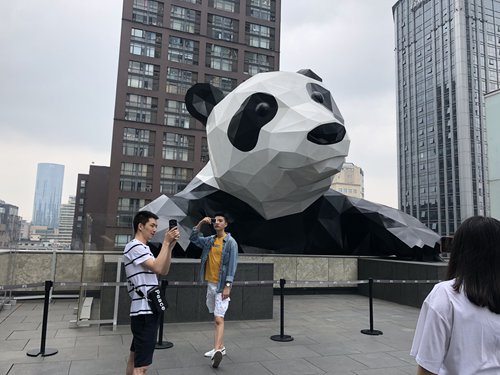 Southwest Chinese city of Chengdu has rolled out an adorable plan called the Land of Giant Pandas.

Widely regarded as a national treasure and the country's ambassador, the giant panda is accorded top-grade state protection as there are fewer than 3,000 left in the wild.

New projects on conservation education, tourism and leisure, cultural creativity, outdoor sport are expected to be built across the city, according to a statement sent by the Chengdu Forestry and Garden Bureau to the Global Times.

With its rich giant panda breeding and scientific research teams, Chengdu has a natural edge in implementing these projects. It is the only base camp for giant pandas in the world, Zhao Songsheng, the manager of Eudemonia Banking, a Chengdu-based NGO specialized in the mammal's protection, told the Global Times.

The image of rotund animal could be easily found everywhere in Chengdu. Outside Shuangliu International Airport it stares at you from the hood of green taxis.

"Every visitor who arrives here is drawn to our city's giant panda. The lovely animal represents the second name card of the city, only after the local delicacy," says a local taxi driver with a bemused expression.

This is the first look that one gets of the creature - known as "living fossil" — in Chengdu, before heading to the world's largest artificial breeding center for Giant Panda — the Chengdu Research Base of Giant Panda Breeding — a must-go on a visit to the city.

Chengdu is scouring the globe for the best planning and design companies meant to implement its ambitious plan.

The new name card will definitely make the city more recognizable around the globe, Zhao said, adding that "It is also part of China's strategy of 'Culture Going out.'"

The project plan is expected to decide the land layout, traffic organization, construction of enclosures, feeding and stocking and other supporting facilities for the protection of the endangered mammals.

The Land of Giant Pandas will be built around 69 square kilometers covering Chengdu's Beihu, Dujiangyan, and Longquanshan areas.

Actually, Chengdu is already famous for the giant panda both nationally and internationally.

When meandering through Chengdu's Chunxi Road business district, no one will miss the huge bottom of the giant panda with the words, "I Am Here."

Because of the sculpture of the giant panda on top of International Finance Square, the building has become one of the most popular landmarks of the city.

Hordes of Chinese and foreign visitors stand in long queues for a selfie or photo with the celebrity to share them on social media.

Some restaurants even have panda-shaped hotpot condiment. Made of beef tallow, it slowly melts while sitting at the center of the pot with chilies and peppers.

It is the best-selling hotpot condiment in the Zuichengdu Hotpot Restaurant, a staffer told the Global Times. "Most customers choose the panda-shaped condiment."

At the end of June, Chengdu will open a 102-kilometer long panda-themed greenway along the city's Third Ring Road, which can be used for hiking and walking.

Residents said the greenway would be a "natural gym" with more than 200 places for resting, buying food and parking.