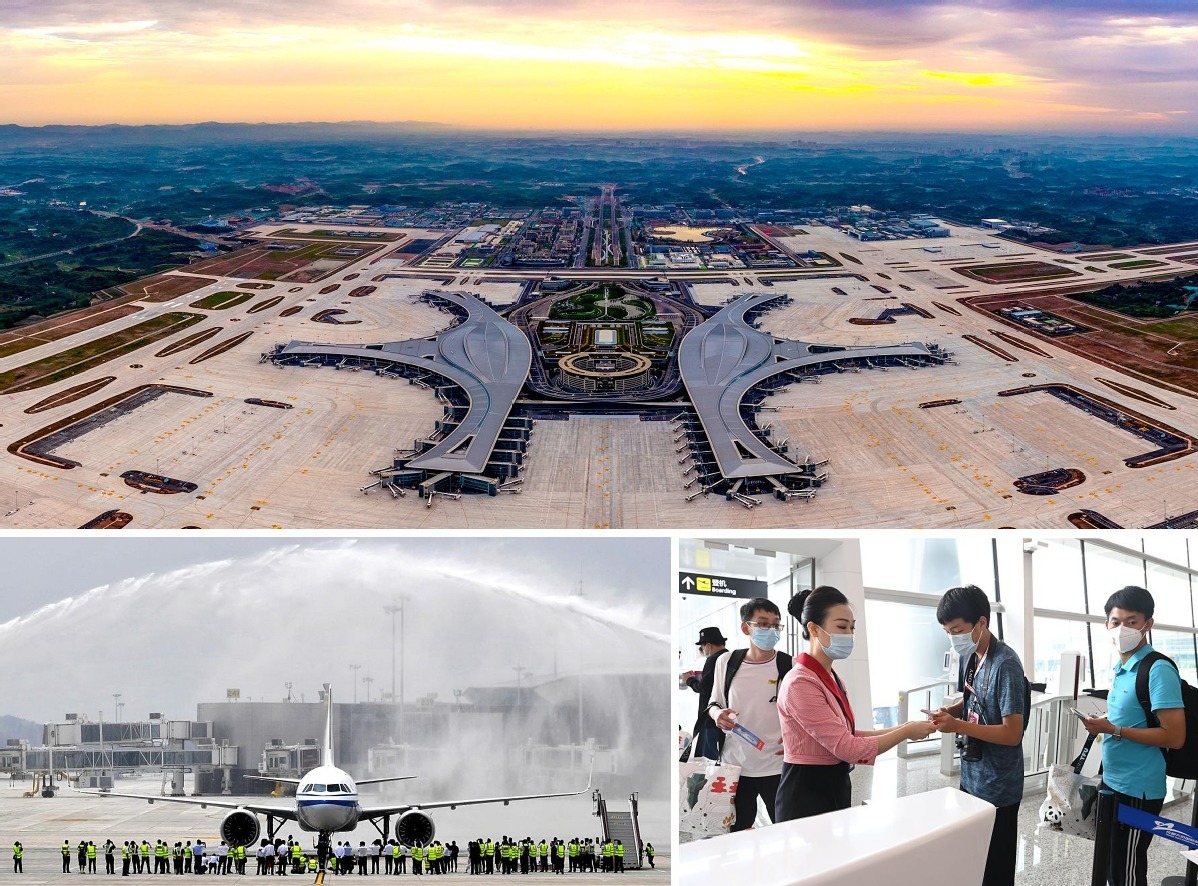 Clockwise from top: An aerial view of Chengdu Tianfu International Airport in Chengdu, Sichuan province, earlier this month before its opening; Passengers board the first departing flight, operated by Sichuan Airlines; The first inbound commercial flight at the airport, arriving from Shanghai, receives a water arch welcome on Sunday. (Photo: CHINA DAILY)

The first plane took off from Chengdu Tianfu International Airport in Sichuan province at 11:25 am on Sunday, marking the start of its operations following five years of construction.

The opening of the airport makes Chengdu the third city in China with two international air hubs, following Shanghai and Beijing.

Chengdu Tianfu, in the town of Lujia in Jianyang - a city under the administration of Chengdu, Sichuan's provincial capital - is 50 kilometers from both downtown Chengdu and Shuangliu International Airport in its suburban Shuangliu district.

Over 30 new technologies have been implemented to make the airport an advanced one by international standards, said Wu Ding, a leading official in charge of its construction.

With a length of 4,000 meters and a width of 75 meters, one of the airport's runways is rated 4F, the highest level, meaning it is capable of handling large civil aircraft like the Airbus A380.

Two flights landed at the airport on Sunday, and six took off, bound for Beijing, Shanghai and Guangzhou, capital of Guangdong province.

The first plane to depart, operated by Sichuan Airlines, had many cartoon pandas on its fuselage. Bound for Beijing Capital International Airport, it carried 262 passengers.

Sichuan is home to most of the world's giant pandas, which are unique to China.

According to long-term plans, Chengdu Tianfu's terminals will eventually cover 1.4 million sq m and will be capable of handling 120 million passengers a year.

The opening of the airport could help Chengdu become an integrated international transportation hub linking China with Europe, the Middle East, Central Asia and Southeast Asia.