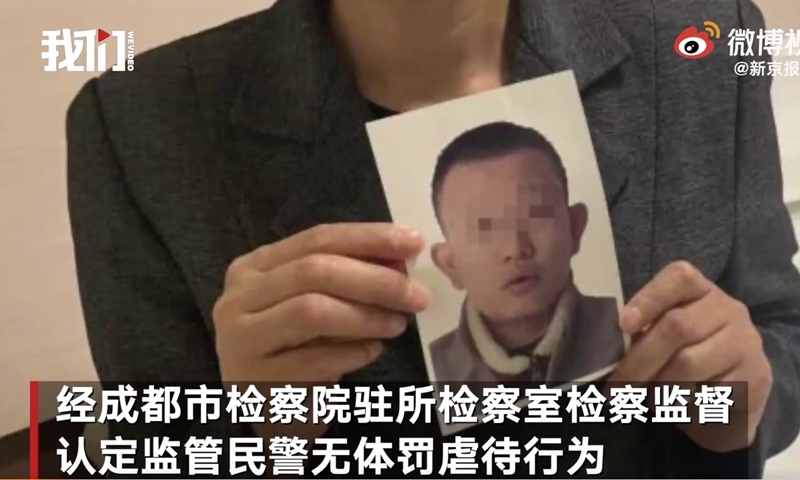 Police in Chengdu, Southwest China's Sichuan Province, ruled out foul play or bullying from other detainees after a 19-year-old man died in custody. Police also said many online speculations are false.

According to a statement released by the police, the 19-year-old man surnamed Yi from Diebu county in Northwest China's Gansu Province was identified as having "full criminal responsibility capacity" by Sichuan Forensic Expertise Center on July 21, 2020 after he was detained by police on July 3, 2020 on suspicions of theft. In August 2020, local procuratorate approved an order for his formal arrest.

His death drew public concerns recently after some news reports revealed that he was mentally disabled and both of his parents are also disabled.

According to Yi's aunt Shan Hao, Yi had become extremely skinny after four months' detention when she saw his body at the funeral home. The family said he had become so thin that his ribs stuck out like "chicken bones."

Yi's sudden death and obvious change in appearance had sparked suspicions that he had suffered corporal punishment or maltreatment from police.

According to the police statement, Yi felt sick on the early morning of November 4 and the doctors at the detention center and the doctors from the Chengdu Pidu Zhengcheng Hospital gave him a first-aid medical treatment in time. He was then transferred to the Third People's Hospital of Chengdu at 10:20 am and was declared death at 10:48 am with the diagnosis of cardiopulmonary arrest.

Yi's body was transferred to the local funeral home immediately in accordance to related regulations and his family members were informed. His family members checked his body on November 6.

The Chengdu police said they have sealed up and viewed all the surveillance footage, spoke to Yi's cell mates and investigated relevant police officers and medical workers. The conclusion was that the detention center's practice was in accordance with laws and regulations.

The People's Procuratorate of Chengdu also said it has found no evidence of corporal punishment from the police and preliminary investigation of Yi's body showed Yi was not killed by fatal injuries. The procuratorate suggests a full autopsy.

However, Yi's family has rejected an autopsy despite of the detention center's communication and coordination for more than 40 times over the past 11 months.

Surveillance footage showed that Yi had a poor appetite and always had some food leftover after each meal. He also gave away some of his food to other detainees. There existed no bullying behavior from other detainees in his prison cell.

According to the procuratorate, Yi's family members have never applied for a guaranteed pending trial but insist on huge compensation on Yi's death without sufficient legal basis.