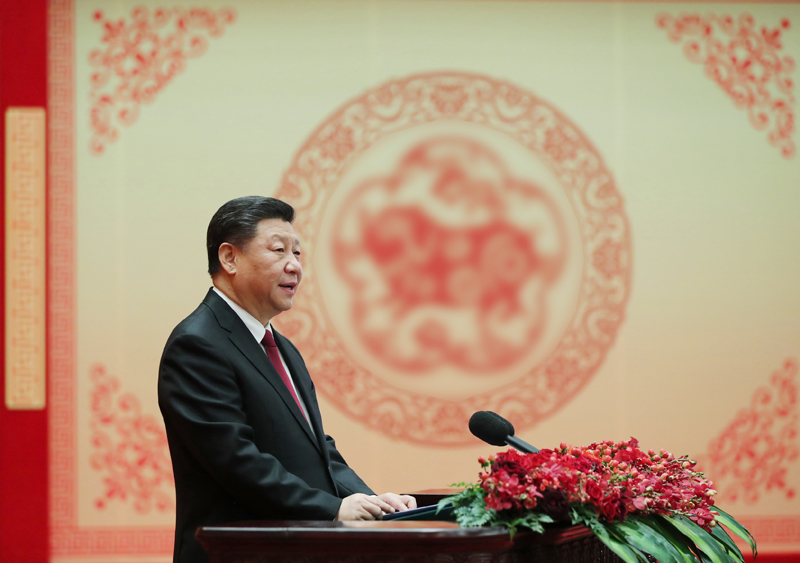 BEIJING, Sept. 13 (Xinhua) -- Sun Hehong's schedule for the Mid-Autumn Festival is full. Besides going to work and visiting friends, he will join a hearty dinner with his family.

"In my childhood, the festival meant simply eating mooncakes. Nowadays we have rich meals, enjoying not only the food but also a happy and cheerful atmosphere," said Sun, founder and chairman of a logistics company based in eastern China's coastal city of Qingdao.

The Mid-Autumn Festival, which fell on Friday this year, is celebrated on the 15th day of the Chinese lunar August. It is all about traditional Chinese family values of reunion, unity, harmony and prosperity. People usually hold family gatherings and celebrate good harvests.

Family harmony has been regarded as the basis for any undertaking among many Chinese.

In a speech to extend Lunar New Year greetings to Chinese people at home and abroad in February 2015, President Xi Jinping stressed family bonds and family education, saying Chinese traditions and virtues of family harmony and affection should be promoted to ensure that the young grow up healthily and senior citizens are taken care of well.

When it comes to family education, Sun said he had been deeply influenced by his parents as well as such traditional virtues as integrity and credibility.

"My mother instructed me to be responsible, grateful and enterprising when I was young," said Sun, who has been inspired by his hardworking parents to redouble efforts for a prosperous life.

Gao Aida, a retired teacher in Beijing, usually partakes in an ordinary meal while chatting with her frugal parents during the Mid-Autumn Festival. Her 91-year-old father Gao Zhentong specializes in structural fatigue and reliability research at Beihang University.

"My father sets a good example to us with his lifelong devotion to the country and lofty personality," she said, praising his selfless and modest character.

After graduation, Sun taught in a private vocational and technical college and then transferred to logistics business before starting his own company, Shandong Sinotraffic Supply Chain Co., Ltd., in 2010.

Benefiting from the Belt and Road Initiative proposed by President Xi in 2013, Sun's supply chain service business has expanded to countries such as Russia, Germany, Kazakhstan, Kenya, Peru and the Philippines. Its annual revenue grew from one million yuan (about 141,200 U.S. dollars) to 200 million yuan last year, and the number of employees rose from five to nearly 100.

A prosperous, strong nation, the national rejuvenation and happiness of the people are embodied by the happiness of tens of thousands of families and the bettered lives of hundreds of millions of people, said Xi, also general secretary of the Communist Party of China (CPC) Central Committee and chairman of the Central Military Commission, at a conference to honor model families across the nation in Beijing in December 2016.

Gao Zhentong has a profound understanding of the relationship between the family and the nation. He experienced the suffering of the Japanese invasion war when he was nine, which prompted him to be determined to serve the building of a strong country through the aviation industry. He chose to major in aviation and dedicated himself to structural fatigue and reliability research, achieving significant achievements.

"My father has realized his value by contributing to building our country into a strong and prosperous one," 58-year-old Gao Aida said.

The CPC's founding mission is to seek happiness for the Chinese people and rejuvenation for the Chinese nation. Adhering to people-centered development, the CPC is leading the whole nation to build a moderately prosperous society in all respects and realize the Chinese dream of national rejuvenation.

The tough battle against poverty is part of the CPC efforts to fulfill its mission.

With a population of about 7,000, the Dulong is one of China's smallest ethnic groups, mainly living along the deep gorges of the Dulongjiang River in the southwestern province of Yunnan. The area was listed as one of the least developed regions in the country. In 2018, the ethnic group shook off poverty thanks to hefty government investment and development of unique industries, and wrote to Xi to tell him the good news.

Xi wrote back, congratulating them. "Letting the people of all ethnic groups have a good life has been my aspiration as well as our common goal," he said in the letter.

Bai Zhongping, 29, is one of the villagers in Dulongjiang Township who got rid of poverty last year. He has a new plan. Ahead of the Mid-Autumn Festival, Bai has been building new guesthouses with wood to keep the traditional house style of the ethnic group.

"My wife supports me. When tourists come, she takes charge of cooking and cleaning," Bai said. "We hope that tourists can experience our traditional culture and that tourism can make more villagers rich."

Young people always play a vanguard role in realizing national rejuvenation, Xi said at a gathering to mark the centenary of the May Fourth Movement this year. He encouraged young people to not only care about their family and country, but also have concerns for humanity.

Sun has set a new growth target for his export-oriented firm by further tapping the cooperation potential with Belt and Road countries.

"We are fostering new growth points in the industry through innovation in services and aim to increase the revenue by 150 percent within three years," he said.