BEIJING - Yuan Ye, a father in Beijing, is proud that his seven-year-old son built and programmed a robotic dog as a Children's Day gift for himself. 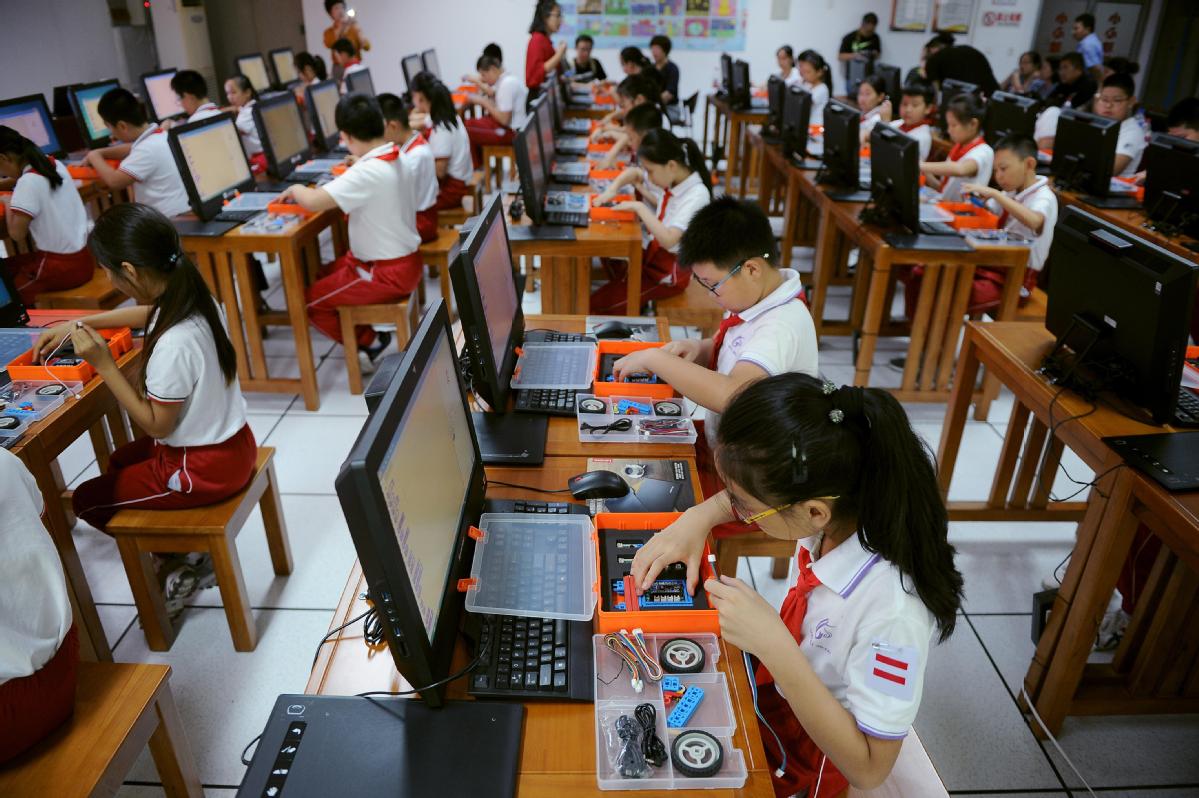 Through component assembling and coding, the boy made the robot bark, nod its head and wag its tail like a real dog, an achievement that he sees as truly special for this year's children's day. It was built in a child coding course he attended in Beijing.

In China, computer coding has become popular as an after-school training course favored by parents who want to pave the way for their children's bright futures.

The younger Yuan has been enrolled in the programming class for three years. "He is interested in a lot of things, but programming is his favorite. So far it is the longest habit of his," the father said.

The UK government overhauled computing teaching method by adding mandatory programming courses for children in 2014. Computer programming is expected to become a mandatory subject in Japan's elementary schools in 2020.

An AI development plan issued by China's State Council in 2017 required adding courses in coding in elementary and secondary education system, and encourages institutions and companies to design software and other related games.

"After 3 years of training, my son can grasp basic physics and computer coding concepts. It brings up qualities in logic and trains him in making objects," Yuan said.

"The purpose is not to prepare him to be a professional programmer, but to develop his creativity and problem-solving skills."

Roughly 200 institutions and companies in China offer online or offline coding training for children, according to researchers familiar with the industry.

Shenzhen-based Codemao is an education company that provides online graphical programming courses for students aged seven to 16. It also provides an online platform where children can design via programming and display their own work, including games and animation.

It has over 10 million online users and its services are available on both smartphones and PCs, the company said.

Booming demand has lured rich capital into the market. In 2017, 30 child coding projects were established in China. The value of a single investment to fund the project kept rising, market researchers said.

The programming education is promising in terms of helping children better understand the information and intelligence industry, however, the intervention of capital and undue anxiety of parents might impede the healthy development of the industry.

"I was trying to find a coding class for my nine-year-old daughter, but the quality of the classes was not satisfactory, " he said.

"These private institutions focus too much on profit, rather than on the quality of the courses," he said.

"Most of the programming education is happening outside schools in private institutions. They should be made available in schools as well," said Xiong Bingqi, vice president of 21st Century Education Research Institute, a leading educational think-tank in China.

Educational authorities shall outline the degree of programming proficiency needed for children so that parents, teachers and children can know better what should be done, he said.

Yuan Ye's son is making steady progress in his out-of-school class. "I really like programming robots," the boy said. "My teacher will show us how to make a robot cat. It can meow when we touch her head."