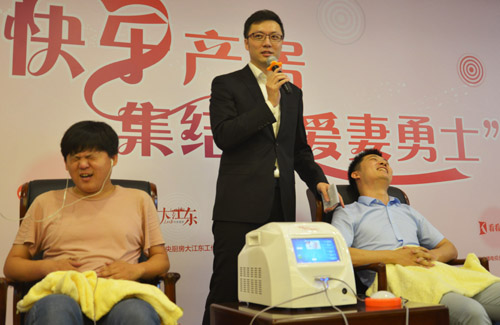 As China celebrated International Children’s Day with laughter and smiles, a group of adult males in Shanghai spent the day writhing in pain and agony on live television, reported by People's Daily Online.

In an experiment designed to educate men on the painful labor contractions women experience while giving birth, over 100 males found out for themselves at the Shanghai First Maternity and Infant Hospital on Friday.

With the help of special-designed machines that administered 10 levels of pain, the male subjects were able to gain a better understanding of delivering a baby is all about.

The experiment was an effort to raise awareness among males by providing them with an experience that would give them a better understanding of the pain that comes with giving birth while promoting painless childbirth technology.

Wu Di, the father of a two-year-old son, took part in the experiment and willingly endured the highest level of pain the machines could administer.

“At first, it felt like a small knife was cutting my body, and then my brain went blank. Such severe pain concentrated in one place cannot be described with words,” said Wu.

There were a few men reluctant to try the experience after seeing how others responded to the pain inflicted upon them by the machine.

China’s first Welfare Alliance to Promote a Painless Childbirth was established on the same date as the child holiday. The group focusses on raising awareness of pain-free birth technology and reshaping popular opinions on labor analgesia.

During yesterday’s experiment, medical experts pointed out that "painless childbirth,” or in medical terms "childbirth analgesia," has been around for over a century is safe to use during natural childbirth.

Guo Junyi, a nurse who works in an anesthesia department at a hospital, was the first participant to achieve “Warrior” status, making it to level 7 on the pain meter. He was unable to go any further.

Guo said often helps pregnant women during the labor process, and shared a few stories about his experiences.

"Sometimes they are unbearable, I tell them to insist, and they respond by reminding me that because I have not experienced childbirth I couldn’t possibly understand the pain, but not anymore. Now I can tell them, ‘I feel your pain.;” said Guo, who later explained the benefits of using labor analgesia.

"Early pain in the long run will consume maternity strength and have an adverse effect on the reproductive process,” Guo said.

Wu said that because it was live television, he had to keep his word with his two-year old boy.

“Had it been a private experiment, by the time I hit level 6 or 7, I would have screamed,” Wu privately told Dong Mei.

“What would you have done had you made it to level 8?” the host asked.

Wu thought for a moment, took a deep breath and said, “I wouldn’t have been able to participate in this interview because the pain would have been too much for me to even speak.”

The presence of a soon-to-be father, or other family members, and even music, are things hospitals can provide a woman to help reduce the labor pains she experiences when delivering a baby.

In one experiment, a participant surnamed Zhan, began screaming in agony while his wife shouted “continue” as the pain meter reached level 3.

Reluctantly, Zhan kept going, eventually making it to level 6. When it was over, he looked at his spouse and announced “Wife, I love you!”

Another participant, an IT professional surnamed Han, took part in the experiment the same time as Wu.

Not known for his way with words, Han insisted on reaching level 7.

When it was over, he said it felt as though a pot of hot oil had been poured on his body, but that it helped him gain a better understanding of what his wife went through when she delivered their son.

Han turned to his wife and said, “You worked hard!”