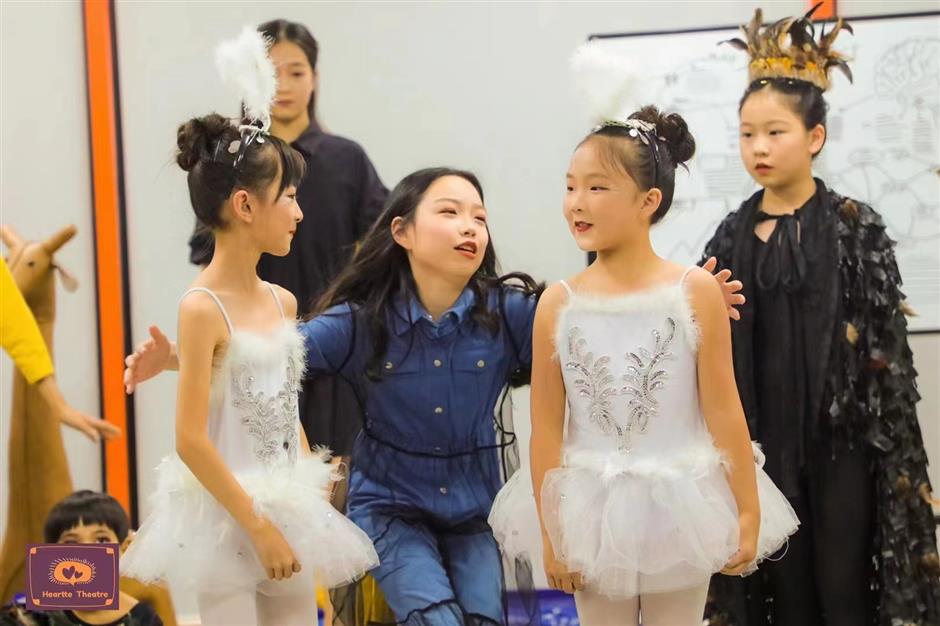 "Dorothy Rescues M-Project Animals" is staged in front of students and parents.

Dramas are being promoted among students in Shanghai to help with their comprehensive development.

A group of 16 students from Shanghai Starriver Bilingual School, aged between 6 and 14, recently produced a musical on the theme of wildlife protection under the guidance of their teacher, and staged it in front of their peers and parents.

The first play tells a story about how Dorothy, granddaughter of Dorothy in the Wizard of Oz, saves animals in the circus from the evil big boss and leads them back to their home in the forest with her friend Ulu, a magical owl that can translate for humans and animals.

In the new play, Dorothy and Ulu have established a video-sharing account D & U Planet to promote the importance of animal protection among the public and become famous uploaders.

They are invited to promote the "M" research project under the leadership of Mr B, who claims that intelligent chips can be implanted into animals, so that they can communicate with humans and become "good partners" for human work, life, leisure and entertainment activities.

Curiosity, sense of responsibility and natural sense of animals drive Dorothy and Ulu to go deep into the project to conduct investigations and find it's a scam. Then, they use the game rules of the Internet age to rescue the animals from the M plan. 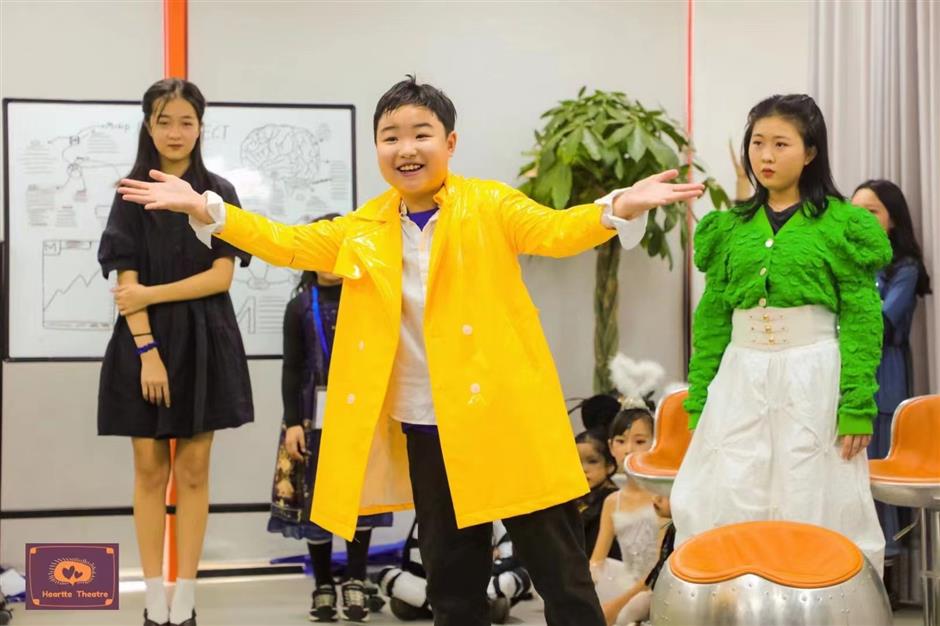 Mr. B brags that his project can help animals communicate with humans.

According to Maggie Qu, tutor of the students, they gave their all to create the musical.

"In 10 afternoons, they worked together for brainstorming, script writing, rehearsals, costume design and poster drawing, experiencing the whole process of the birth of a musical from scratch," she said.

"They have developed skills on how to develop their creative ideas and express themselves confidently when learning musical art. It also helped them enhance their awareness and capability in group work."

The main roles, such as Dorothy and Ulu, the evil big boss and the cheater scientists, are played by the older children, some of whom also performed in the first play five years ago, with the wild animals played by the younger children.

"Although most of the younger children played the minor roles, I think the experience has embedded the sparkle of interest for musical and performance in their hearts," said Qu. 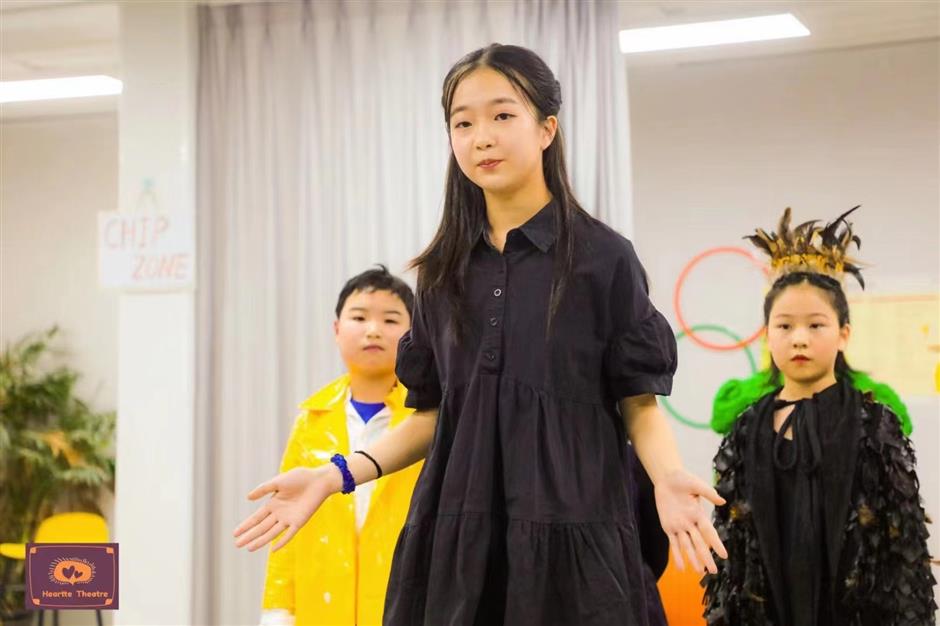 Li Yunduo, the author for both plays, plays a minor role in the musical.

Thirteen-year-old Li Yunduo, playwriter for both musicals, also served as the backstage manager this time.

"Five years ago, after I wrote the story of the first play, I knew that the journey was not over," she said emotionally. "Wild animals are neighbors of mankind on the Earth, an indispensable part of the Earth's biodiversity, and a witness to the vicissitudes of the Earth. Wild animals need the protection of human beings, so this sequel came into being.

"In the era of rapid social development, how should we advance with the times and how to leave a quiet living space for animals? This is a question I have been thinking about."

Zhou Yunxiao, 14, played a leading role in the last play. However, in the new play, he chose the role of less part and the stage supervision work for the production team.

The public welfare theme of this play has won the unanimous support of children and parents, as well as the support of social organizations such as Green Light, a public welfare organization focused on education for sustainable development. It rewarded the children after their performance for their efforts in promoting public awareness in animal protection and biodiversity. 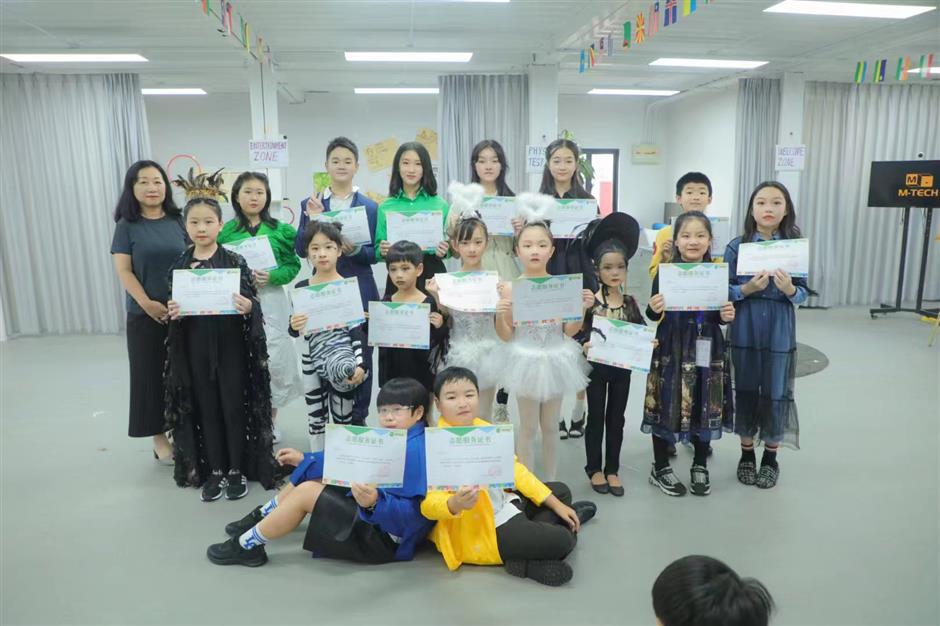 The little actors are awarded by Green Light, a public welfare organization, for their efforts in promoting public awareness in animal protection and biodiversity.