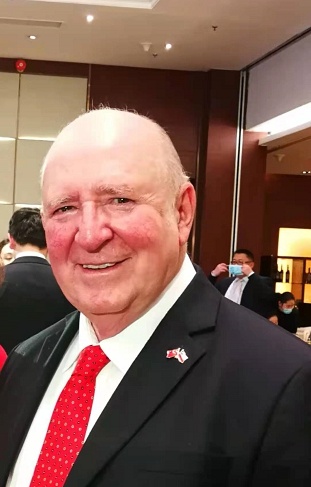 The ambassador of Chile, the country which has become a major source of imported cherries for China, reassured customers that fresh cherries contain "minimal COVID-19 risks," saying he expects the country's cherry exports to China will increase during this year's Spring Festival despite concern over the safety of the fruit.

"There is minimal risk of COVID-19 from imported cherries, as the shipment should be above zero degrees," Chilean Ambassador to China Luis Schmidt Montes said, dismissing speculations that the recent positive COVID-19 cases involving imported cherries are from Chile.

"Cherries are safe, and good for customers' health," Montes added.

Last week, the inner packaging of a batch of imported cherries was found to be COVID-19 positive in Wuxi, East China's Jiangsu Province. Although it is still unclear which country it was imported from, it has sent shockwaves online and dragged down cherries prices.

In East China's Zhejiang Province neighboring Jiangsu, prices of imported cherry have plunged to as low as 16 yuan ($2.43) per kilogram following the detection of the positive samples, compared with around 60 yuan per kilogram previously.

"We have not received any official communication from the local authorities or any other official Chinese body certifying that the findings referred on the news are a product imported from Chile," Montes told the Global Times.

According to Montes, unlike cold-chain shipping that usually stores food at subzero temperatures, shipments of fresh fruits are usually between 4 and 6 degrees, and has significnatly lower COVID-19 risks.

"Cherries cannot be infected," Montes said, "and as health experts have confirmed, the risk of getting COVID-19 from cherries is extremely low."

Yang Zhanqiu, deputy director of the pathogen biology department at Wuhan University, confirmed to the Global Times that the COVID-19 virus is unlikely to survive for more than two days in temperatures above zero degrees.

"Normally, it is unlikely to be infectious when exposed in the air at temperatures above zero for 24 hours ," Yang said, "whereas in temperatures between minus 10 to minus 20 degrees in cold-chain shipments for meat products, the virus can stay active for at least a month."

"The risks in fresh fruit shipments and cold-chain shipments are not comparable," Yang said, "In my opinion, eating imported fruits after a simple wash should be safe enough."

Fruit exports are one of the most important industries in Chile, and it is betting heavily on the Chinese market. Accoridng to stastistics from Chilean authorities, Chile cherries' dependence on the Chinese market has been soaring since 2010. As of 2019, more than 91 percent of its cherries are consumed by Chinese.

According to Montes, strict safety measures have been imposed on the cherry export sector, including complete traceability and thorough disinfection throughout the export chain.

Masks and temperature checks are mandatory in Chile's cherry orchards and facilities, and Chilean authorities have been in close contact with China's Customs authorities, Monte added.

Despite the wariness of imported fruits among Chinese customers, Montes said he is still optimistic about the sales of this cherry season, especially with the coming Spring Festival.

"For this season, exports to China are expected to grow around 36 percent year-on-year," Montes said. "About 1,000 containers will arrive in China for the peak festive season in the next 10 to 15 days."

The total projection of exports for this cherry season is approximately 288,000 tons, he said.