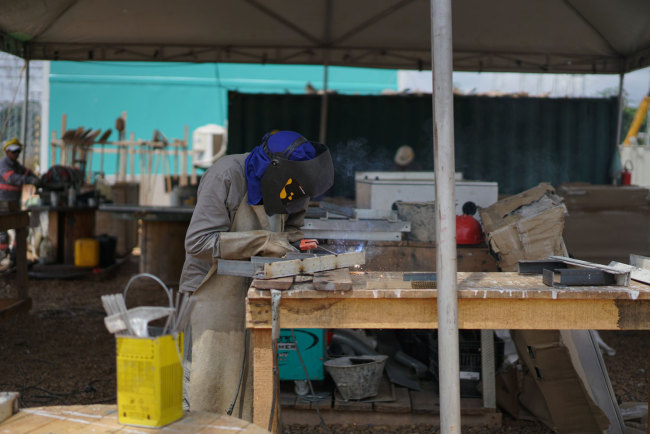 The file photo shows a Brazilian worker at the construction site of a major power grid project built by State Grid Corporation of China in Brazil.(Photo: China Plus)

China's electricity giant has completed a major power grid project in Brazil to deliver hydropower from the Amazon region in the north down to the country's economic centers in the south, creating thousands of skilled job opportunities for local communities along the way.

With a transmission capacity of four million kilowatts, the line stretches across 80 cities, delivering power from the Belo Monte hydroelectric dam to economic centers in the southeast like Sao Paulo and Rio de Janeiro.

Construction work stated in September in 2017 and was finished this month, two months ahead of schedule.

"I think their strong project execution capability helped us to complete the project ahead of schedule. The ample financial support ensured that the construction work by the contractors went smoothly. Besides, we also have competent management capability; our teams are very experienced and are able to quickly solve difficult problems. The equipment required was always shipped to the construction site in advance, which helped us finish the project on time," said Xiao Bin, a senior project manager with China's State Grid, attributing the efficiency and high-quality of the construction work to the expertise of their technical management team.

But long distance power transmission has been a problem that plagued the country for a long time.

Brazil's government decided in 2013 to use ultra-high voltage transmission technology for the transmission project, given it's able to provide high transmission capacity with relatively low loss over long distances.

But the benefits of the project have proved to be more than just a sufficient and stable power supply.

"The project is the largest ever power project in Brazil, and is of great significance for the country. It will effectively resolve the power shortages in the south of the country. Brazilian engineers also participated in our project. We offered relevant technical training for local engineers," Xiao Bin said, adding that the transmission line project has created 16 thousand jobs for local communities and generated taxes of over 2 billion Brazilian Real.

"Once it goes into operation, the equipment will constantly vibrate. Our technique enables the equipment to withstand this vibration and avoid cracking," said Jia Yongjian, another manager of the project, adding that their sound construction plan and mature techniques guaranteed a high-quality outcome for the project.

The transmission line is expected to be put into operation in the third quarter of this year.