As China marches toward its second centennial goal, the focus of promoting people's well-being and happiness has shifted from pure high economic growth to boosting common prosperity, an essential requirement of socialism and a key feature of Chinese-style modernization, which is a target that could be achieved only in China where socialism with Chinese characteristics provides a key advantage, experts said. 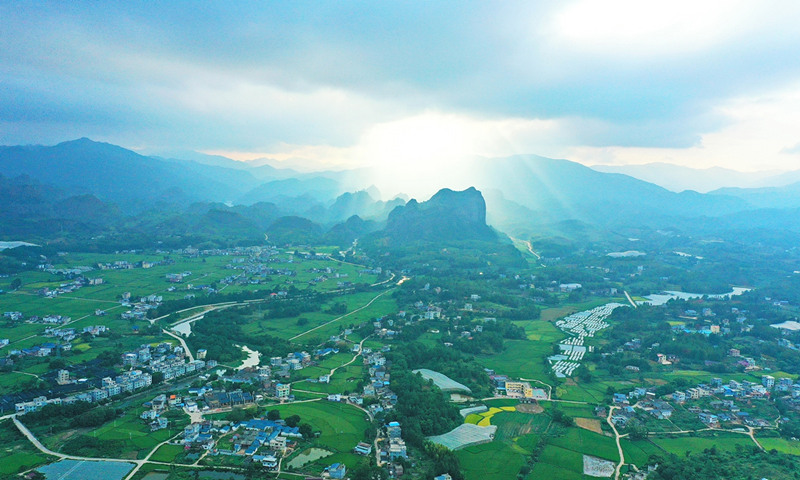 An aerial photo shot on Monday shows the natural beauty of a village in Huichang county in East China's Jiangxi Province. Huichang had been on the list of national-level poverty-stricken counties since 1986. The county shook off poverty in 2019 due to a massive poverty relief campaign. Photo: IC via Global Times

The establishment of the target, which involves the long-term governance fundamentals of the Communist Party of China (CPC), responds to one of the biggest difficulties toward 2049, the centennial of the founding of the People's Republic of China in 1949.

Dividing the cake fairly instead of only seeking to make it bigger will be the key theme of China's economic and social development for some time, and it is an issue that all economies in the upper-middle-income level should tackle; otherwise, it will lead to serious social contradictions, they noted. In this sense, China's practice of common prosperity by pushing all-around reforms to benefit the people, different from the West's governance that serves only the elite and affluent, will set a standard for the world.

Rather than being egalitarian or having only a few people prosper, common prosperity refers to affluence shared by everyone, both in material and cultural terms, and shall be advanced step by step.

The goal of common prosperity is an unprecedented mission that could be achieved only in China under the leadership of the CPC, while other Western countries, although ostensibly hyping increasing workers' social welfare, are doomed to fail, according to observers.

"The nature of Western countries' capitalist system is to pursue profits, and as a result, wealth is only concentrated in the hands of capitalists who accumulate assets by exploiting workers. Such a way of running social resources will lead to only widening the wealth gap," Wang Yiwei, director of the institute of international affairs at Renmin University of China in Beijing, told the Global Times on Wednesday.

And the very nature of socialism is to advance justice and fairness, of which common prosperity is a material premise and requirement, observers said.

"The CPC has merged the Marxism theory with traditional Chinese culture, and this is how the two centennial goals of xiaokang and common prosperity were proposed. The one-party ruling system has allowed China to write such goals into the Constitution and achieve it step by step," Wang said. In contrast, the West's party system does not guarantee the sustainability of policy implementation, making it hard to pursue a goal in the long term.

Cong Yi, dean of the School of Marxism at Tianjin University of Finance and Economics, told the Global Times on Wednesday that any country or region that crosses the middle income trap and enters the middle income ranking will face the issue of common prosperity for its people, and not dealing with it will lead to serious social contradictions that poison economic development.

With its per capita GDP above $10,000 and a middle-income group exceeding 400 million, China is already an upper-middle-income economy by World Bank standards, and is expected to enter the ranks of the high-income economies during the country's 14th Five-Year Plan (2021-25) period.

"In the US, their policy of taxation for the affluent could not fix the widening gap in a fundamental sense, which means American society is accelerating its divisions," Cong said. "In China, we can see an array of measures marked by flexible institutional adjustments to address the problems, which is our biggest advantage."

As the Tuesday meeting noted, the government will ramp up efforts to properly deal with the relationship between efficiency and fairness, make basic institutional arrangements on income distribution, expand the size of the middle-income group, increase the earnings for the low-income groups, adjust excessive incomes and prohibit illicit income to promote social fairness and justice. Hailing the importance of advancing a balanced, coordinated and inclusive development, the meeting stressed that China should improve the socialist market economy, strengthen balanced development among regions and promote coordinated development across industries.

"Common prosperity has been written in the genes of the CPC leadership as an internal requirement, and it is not a catchphrase that came to light suddenly. The central leadership has been attaching importance to the issue since the 18th CPC National Congress [held in 2012]," Cong said.

"It is the goal that we will achieve at whatever cost, and it needs long-term persistence regardless of both internal and external chaos, and only through that will a true global power with socialism of Chinese characteristics be born, a country that will stun the world," said Cong.

Since a slew of economic reforms and opening-up policies was introduced by late Chinese leader Deng Xiaoping in 1978, China has stepped onto the track of a socialist market economy, which has brought huge changes to the country that could be called an economic miracle.

With the country's economy expanding at an average of 9.5 percent since 1978, which was far beyond the world economy's 2.9 percent in the same period, economic imbalances have also emerged as figures showed that the rich have become richer, while poor places continued to lag behind.

China's development inequality is mainly manifested in three fronts - urban-rural income gap, regional imbalance and gaps across different industries, according to observers. But they said that while the imbalance is natural in a market-oriented economy, it is only temporary.

"The imbalance has been widening in recent years due to multiple factors ranging from accelerated urbanization and industrialization, and the development of a market-oriented economy which will easily lead to some resource monopolies," Hu Qimu, chief research fellow at the Sinosteel Economic Research Institute, told the Global Times on Wednesday.

According to Cong, the urban-rural income gap has contributed over 50 percent to the development imbalance. "If we want to realize common prosperity, we should put more efforts on the vast remote village to boost the local economy," Cong noted.

For Shao Qingjun, a villager of Huayuan village, Dongyang city, East China's Zhejiang Province, he's proud to live in the village, earning more money than the average income in some underdeveloped cities.

Engaged for more than two decades in the redwood furniture sector, a pillar industry of the local rural economy, Shao witnessed the labor force surge in the past years in the village instead of the other way around since many people living in the village are inclined to make a living in urban areas.

"We have various industries to support economic growth, and convenient access to resources like education, medical care and tourism, which makes me very happy working in the village," Shao noted.

In July, authorities in Zhejiang launched a detailed road map for the 2021-25 period to build a common prosperity demonstration zone in the province. The guidelines aim to increase provincial residents' per capita disposable income to 75,000 yuan ($11,560) by 2025.

Tian Yun, former vice director of the Beijing Economic Operation Association, noted that some entrepreneurs who became rich first and amassed their wealth through illegal practices such as monopolies and corruption have further added to the imbalance.

"The top-down design of common prosperity shows that the [Chinese] central government will be sparing no efforts and be committed to fixing these issues, although those involving relocating residents' income are daunting tasks," Tian told the Global Times on Wednesday.

Hu Qimu predicted that Chinese authorities will improve their coordinating mechanism for primary and secondary income distribution. There will also be an overhaul in the tax system - for example, in rebate taxes and offering national subsidies to low-income groups, according to Tian.