"This principle embodies the self-imposed discipline by China in its cooperation with Africa. It also represents the ethical norms that should guide international development cooperation. Ultimately, it is for the people of Africa to say whether China-Africa friendship and cooperation is true and to judge the performance of China-Africa cooperation," said Hua Chunying, the spokesperson for MFA. 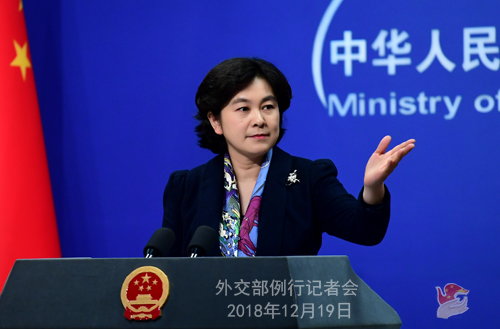 A reporter said at the regular press conference on Wednesday that US National Security Adviser John Bolton criticized China in a speech on the US government's new Africa strategy on December 13. Many people in the US and African countries have expressed criticism on Bolton's remarks.

"I've noticed relevant reports. The release of the new Africa strategy and the remarks made by the US official you mentioned have caused such widespread criticism in the international community and even in the US. It is indeed worthy of the relevant US official to reflect on it," Hua said.

"The US side should think clearly whether the purpose of the US' new Africa strategy is to promote Africa's development or to target China-Africa cooperation. If it is the former, China and the US can play their respective advantages and jointly support Africa's development. If it is the latter, we believe African people have sharp eyes, and this kind of practice of the US is not only self-humiliating, but also self-deprecating,” Hua said.