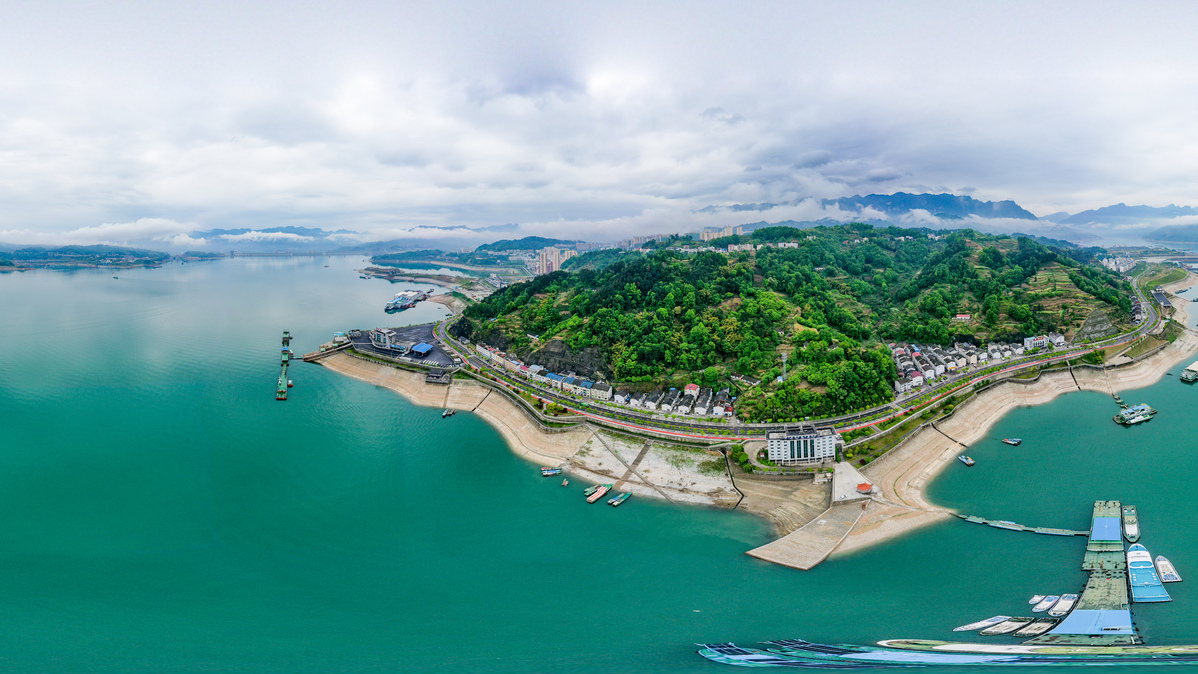 Ships dock at a tourism port on the Yangtze River in Zigui, Hubei province, in April, 2020. (Photo: Xinhua)

The law, passed at a Standing Committee session of the National People's Congress (NPC), the top legislature, will take effect on March 1, 2021.

With 96 provisions in nine chapters, it is China's first legislation on a specific river basin.

The law is formulated to "strengthen the protection and restoration of the ecological environment in the Yangtze River basin, facilitate the effective and rational use of resources, safeguard ecological security, ensure harmony between human and nature, and achieve the sustainable development of the Chinese nation," according to its first provision.

In the economic and social development in the Yangtze River basin, efforts shall be made to "promote well-coordinated environmental conservation and avoid excessive development," while ecology shall be prioritized, according to the law.

Stretching over 6,300 km, the Yangtze boasts rich biodiversity and mineral and water resources in its basin. But long-time overfishing and pollution have threatened its aquatic life and depleted fish stocks.

A report on the legislation unveiled in December 2019 explained the urgent need for protection. Drought is not uncommon at some of the lakes. Some of the regions along the river are rife with desertified lands and soil pollution, while more polluting industries are moving upstream.

The grim situation has aroused growing public concern. In the first and second annual sessions of the 13th NPC, 214 lawmakers submitted motions concerning protection legislation on the basin.

A coordination mechanism will be set up by the State to make overall plans for, coordinate, guide and supervise the Yangtze protection work, which will be implemented by State Council departments and provincial-level governments along the river, according to the law.

The law stipulates legal responsibilities and penalties in an entire chapter to give it teeth. Wrongdoers will be fined, or even face criminal penalties if their violations constitute crimes.

In January, China implemented a full fishing ban in 332 conservation areas in the Yangtze River basin, which will be expanded to a 10-year moratorium for all natural waterways of the country's longest river, including its major tributaries and lakes, from Jan. 1, 2021.

Enshrining the Yangtze moratorium, the new law also adds "designated areas of the Yangtze estuary" to the ban.

Fishing for productive purposes is banned in the conservation areas for aquatic life in the Yangtze basin, and within the time limit prescribed by the State, productive fishing for natural fishery resources is banned in key Yangtze waters including its main river, major tributaries and lakes, and designated estuary areas, it says.

Agricultural and rural affairs authorities of the State Council shall work with other related State Council departments and provincial-level governments of regions along the Yangtze to strengthen the enforcement of the fishing ban, according to the law.

Governments at or above county level along the river are required to adopt compensation policies for fishermen moving ashore, guide them in finding new jobs, and ensure social security services.

The Ministry of Agriculture and Rural Affairs said earlier this month that 231,000 fishermen had relinquished their nets in 10 provincial-level regions along the river.