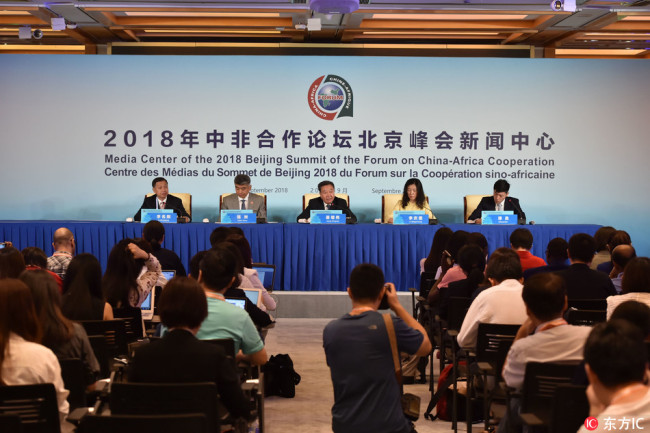 A press conference on the High-Level Dialogue between Chinese and African Leaders and Business Representatives is held in Beijing, on Friday, August 31 2018. [Photo: IC]

China will host more than 1,000 African representatives from over 600 enterprises, business groups, and research institutions at an upcoming conference of Chinese and African entrepreneurs.

The conference, the sixth since 2003 and officially known as the High-Level Dialogue between Chinese and African Leaders and Business Representatives, runs from next Monday to Tuesday as part of a series of conferences under the 2018 Beijing Summit of the Forum on China-Africa Cooperation.

"Applications for attendance significantly surpassed our expectations," Jiang Zengwei, head of China Council for the Promotion of International Trade, said Friday at a press briefing.

The number of African representatives comes in at 1,069, accounting for more than half of the total.

All 53 African countries that have established diplomatic relations with China will send representatives to the conference, said Jiang.

There will be 67 Fortune 500 companies, and also small and medium-sized enterprises, covering both traditional sectors, such as energy, finance, agriculture, manufacturing and infrastructure, and emerging industries including internet and e-commerce.

Jiang said China-Africa cooperation on industrialization, trade, and infrastructure will be the major topic during the meeting.

"Industrialization is the prerequisite and key point for African countries to create jobs, reduce poverty and improve livelihoods, and then achieve inclusive and sustainable development," Jiang said, adding that Chinese investment will help the continent to upgrade its industry and bolster endogenous growth capacity.

The conference will also focus on measures to facilitate African exports and help African companies integrate into the global value chain, as well as expand China-African trade. China has been Africa's largest trading partner for nine years in a row.

Discussions will be held on the planning, construction, and operation of infrastructure projects and the public-private partnership financing, as more efforts will be made to improve African infrastructure and push forward economic integration.

Chinese and African economies are complementary and there is enormous potential for further cooperation, Jiang said, adding that he expects the business communities of the two sides to achieve win-win cooperation of better quality and at a higher level.