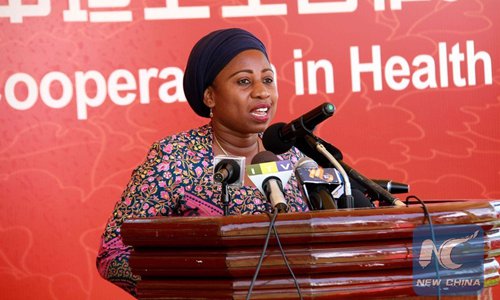 Ummy Mwalimu, Tanzanian Minister of Health, delivers her speech during a ceremony to mark the 50th anniversary of China's dispatch of medical teams inTanzania, in Dar Es Salaam, Tanzania, October. 29, 2018. The Chinese Embassy in Tanzania has announced the launch of a new program called Health Cooperation Benefiting Tanzania aimed at providing freemedical services in remote and rural areas. (Photo: Xinhua)

Abaoutou Bonaventure Ulrich, a member of the Central African Republic's (CAR) presidential guard, proudly displays a badge with the name of a Chinese policeman inscribed on it.Attached to Abaoutou's uniform, the badge serves as a reminder of his affection for the Asian country and its people, especially to his "Chinese master" as he keeps his name in the badge.From his Chinese master, Abaoutou received the mentorship and training required to become an elite security officer guarding the president.Abaoutou is one of beneficiaries of the training conducted by Chinese tutors from the Fujian Police College who arrived in CAR's capital of Bangui in November 2018 to help build the capacity of presidential guards.During the training, the Chinese coaches and their CAR students had to grapple with immense challenges like power outages, mosquito bites and lack of modern equipment, but nevertheless formed enduring friendship."I am very proud to have a Chinese master, I would like his name to be known to everyone. He is so strong, I learned a lot from him, and I will not forget him," said Abaoutou, who is currently in China for an advanced training.The bubbly policeman symbolizes the strong ties China has forged with the CAR and the entire African continent across diverse spheres like culture, security, health, agriculture and power generation.COOPERATION BREAKING NEW GROUNDA team of Chinese researchers traveled to the CAR in March to help teach local farmers to adopt agricultural technology called "Juncao", or fusion of mushroom and grass, at no cost.This technology, being popular in the Global South, has proved to be effective in boosting food security, curbing desertification and generating electricity for households.Faustin-Archange Touadera, President of the CAR, once proudly tasted a mushroom grown through Juncao technology, saying it was an early harvest of technical cooperation with China.The CAR has experienced civil strife in recent years, but is currently harvesting fruits of mutual cooperation with China in the fields of security, health, agriculture and infrastructure development.Through its embassy in Bangui, China has supported the CAR on its war against endemic malaria through provision of antimalarials.Pierre Somse, the CAR's Minister of Health, lauded China for lending support towards the country's efforts to eradicate malaria that happens to be a leading cause of death among children and pregnant mothers.AFRICA REAPING FRUITSChina unveiled 6 trillion shillings (60 billion U.S. dollars) to be channeled towards Belt and Road projects like roads, bridges ,seaports, energy and telecommunications during the FOCAC summit held in Beijing from September 3-4, 2018.In Kenya, the Standard Gauge Railway (SGR) commuter train, which is a critical component of the Belt and Road Initiative, has been at the forefront of revolutionizing transport and commerce in the east African nation.The SGR passenger service popularly known as Madaraka Express has ferried close to three million commuters including tourists, business executives and ordinary Kenyans since its launch in May 31, 2017.James Macharia, transport and infrastructure cabinet secretary, said during the second anniversary of Madaraka Express on May 31 that it has made positive impact to the Kenyan economy and citizen's livelihoods."The SGR commuter and freight service has presented new opportunities for Kenyans through job creation and technology transfer while helping in navigating transport challenges which had partly hindered Kenya from fully realizing its domestic potential," said Macharia.He said the modern train has revitalized tourism in the coastal city of Mombasa while stimulating trade and investments in small towns along its route.Liu Jiuping, general manager of SGR train service operator, said it has been an embodiment of China-Kenya cooperation in skills and technology transfer since its launch two years ago."To meet the demand for SGR value, we have launched multiple training modes including mentorship and on the job training to promote technical transfer of advanced China railway management to local employees," said Liu.During their meeting on the sidelines of the 2018 Beijing FOCAC summit, leaders of China and Kenya pledged to elevate cooperation in strategic areas like agriculture, infrastructure, health, people to people exchanges and industrial development.China welcome Kenya to participate in the Belt and Road cooperation and said that Beijing is keen to support Nairobi establish an economic belt and industrial parks along the SGR corridor.To illustrate the vibrancy of China-Kenya cooperation, Kenyan President Uhuru Kenyatta attended the inaugural China International Import Expo held in Shanghai from November 5-10, 2018.During the Expo, Kenyatta signed deal with China to pave way for export of more than 40 percent of Kenyan fresh produce like mangoes, avocado and cashew nuts to China.The Kenyan leader also attended the second Belt and Road Forum for international cooperation held in Beijing from April 25 to 27 this year where he inked deals to facilitate development of a smart city and an expressway to decongest the capital Nairobi.BENEFITS SPREADING IN AFRICACitizens of the Indian Ocean island of Pemba located off the eastern coast of mainland Tanzania have battled schistosomiasis infections for decades, but have found relief recently, thanks to intervention of a Chinese medical team.In two years' time, the Chinese medical experts from Jiangsu Institute of Parasitic Disease managed to enhance detection of schistosomiasis and treat about 600 patients suffering from the disease.The experts have been visiting remote villages in Pemba to conduct tests and encourage local communities to adopt hygienic practices that would boost efforts to contain schistosomiasis that is spread through contaminated water.Thanks to intervention of Chinese medical experts, the World Health Organization's evaluation team has concluded that schistosomiasis infections in Pemba reduced from 8.92 to 0.64 percent.