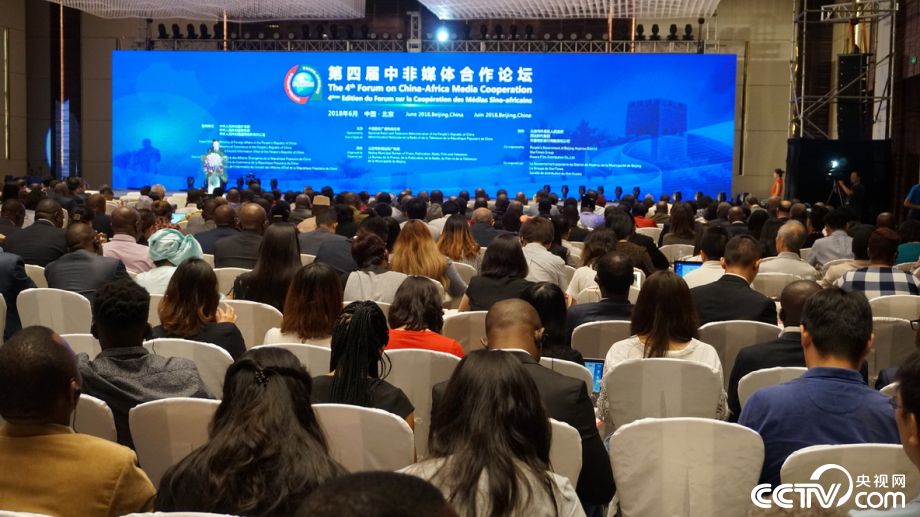 The fourth Forum on China-Africa Media Cooperation is held in Beijing on Tuesday, June 26, 2018. (Photo: cctv.com)

The fourth Forum on China-Africa Media Cooperation ended with a joint statement on further deepening exchanges and cooperation, in Beijing Tuesday.

More than 400 government officials and heads of media organizations from African countries and China attended the forum.

Nie Chenxi, minister of the State Administration of Radio and Television, said at the opening ceremony that the forum has played an important role in the development of China-Africa comprehensive strategic and cooperative partnership since its founding in 2012.

China's recent enhancement in media cooperation with African countries has given many African professionals chances to see how China has developed and get training, CEO of Ethiopian Broadcasting Corporation Seyoum Mekonen Hailu said.

"Such a forum and other means are deepening our cooperation and mutual trust. More and more media professionals should come to see and study in China. This in turn helps the promotion of China-Africa relationship," he said.

Dora Siliya, minister of Information and Broadcasting of Zambia, said China's emphasis on cooperation rather than coercion, has generated favorable conditions for its relations with many African countries to flourish.

"This forum gives us another opportunity to share ideas on how our media sector can draw lessons from China's experience in policy and identify some of the measures that can be useful in our situations back home," she said.

Looking into the future, Chinese and African media have decided to take the Forum on China-Africa Cooperation Summit, to be held in Beijing in September, as an opportunity to further deepen media exchange and cooperation.

They also reached a joint statement at the closing ceremony of the forum. According to the statement, Chinese and African media will intensify policy dialogue, enhance cooperation in key sectors such as news coverage, content production and channel development and continue to support media digitalization and capacity building in Africa.