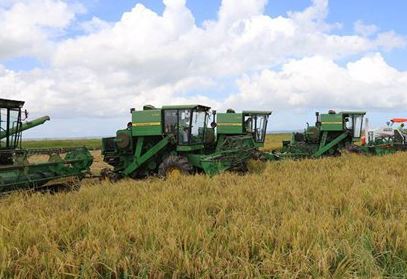 African countries are willing to learn more Chinese agricultural technologies, especially in rice industry, to tackle food security issue in the continent. Salifou Ouedraogo, Burkina Faso minister for Agriculture and Hydro-Agricultural Developments, told the Global Times on Friday that China has been a great support in providing technology and preferential trade policies in the agricultural sector. "We are especially keen on learning from China's high-end technologies to help our agriculture," Ouedarogo said. "With the help of drones and other monitoring technologies, our farmers can get to know exactly when and how much water is needed for their crops."In 2018, China also signed a tariff agreement with Burkina Faso, which exempts tariffs on 97 percent of the country's exports to China."We are very grateful for the preferential policy," Quedraogo said. "Our farmers and manufacturers are very motivated and excited to know their products will have a market of over 1.4 billion people."Ouedraogo, along with some 10,000 guests and traders, including those from 53 African countries, is attending the three-day first China-Africa Economic and Trade Expo in Changsha, Central China's Hunan Province. During the expo, the Joint Initiative on Strengthening South-South and Triangular Cooperation in China-Africa Rice Value Chain, proposed by seven organizations, including the China National Hybrid Rice Research and Development Center and the African Union, was released on Thursday.According to the joint initiative, African countries and China, along with partners of the initiative, will review China's technologies in the rice industry, and carry out experimental plants to localize China's aided agricultural technology. Nick Austin, Director of Agriculture Development of the Bill and Melinda Gates Foundation, which is also a partner of the joint initiative, told the Global Times that China has been contributing in many ways to help Africa solve its food security problem."We are not just looking to move the technology to Africa and expect it to solve the problem," Austin said, "we are trying to find new varieties of crops and technology that can adjust to the local conditions and environment."Food security has long been a challenge faced by the continent. A UN report said that by 2050, 70 percent more food is needed to feed the global population. The Food and Agriculture Organization said out of the 86 countries that are food deficient, 43 are in Africa. China has been working to provide new varieties and technology in agriculture to African countries since 2006, and, so far, the efforts have started to bear fruit. In Madagascar, a hybrid crop variety developed by Chinese scientists has a yield of 10.8 tons per hectare, far exceeding the yield of local crops by an average of 3 tons, China Central Television reported on Friday. Chinese experts and technicians have carried out more than 300 small-scale projects in nine African countries, promoted 450 agricultural technologies, and trained nearly 30,000 local farmers and technicians, the Xinhua News Agency reported.