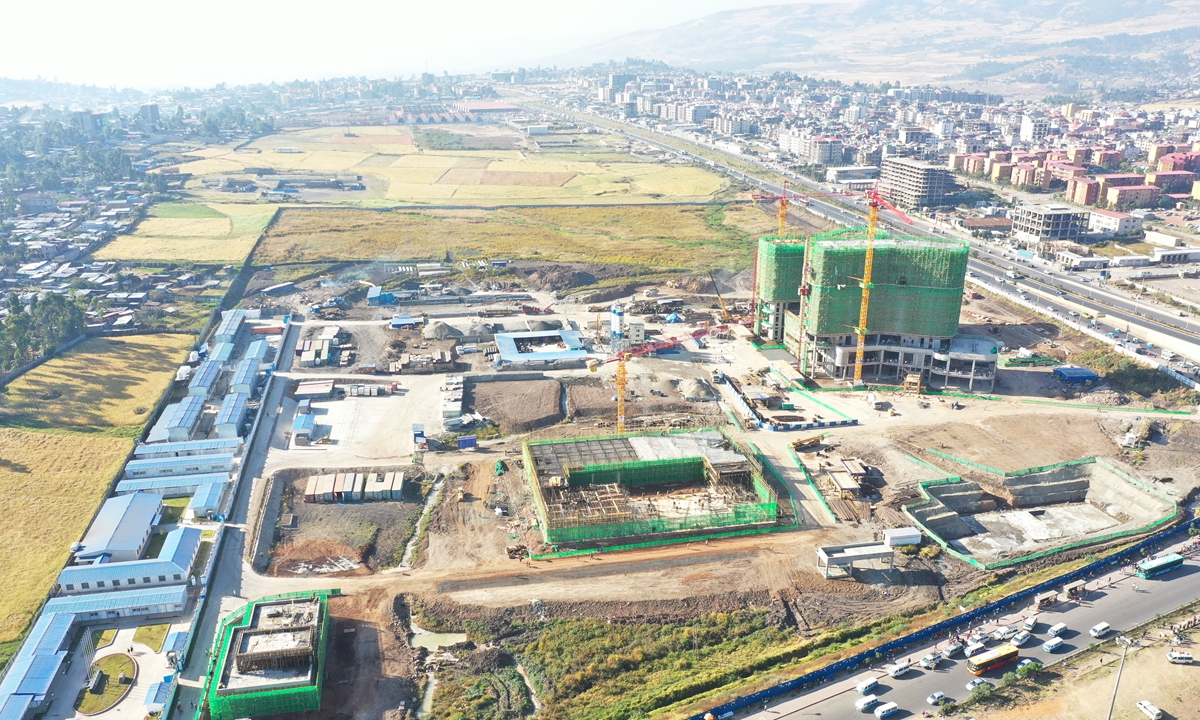 The main structure of the China-Aided Project of Africa CDC Headquarters Building (Phase I) in Ethiopia's capital of Addis Ababa Photo: Courtesy of CCECC

Chinese companies have been a solid force in promoting in-depth China-Africa cooperation, which has shown resilience amid the COVID-19 pandemic, and will continue to play a major role as China and Africa are set to further step up bilateral cooperation, despite rising challenges such as the pandemic and external interferences, a senior Chinese business representative told the Global Times.

Chinese and African leaders are set to convene the Forum on China-Africa Cooperation (FOCAC), which is scheduled to take place on Monday and Tuesday in Dakar, capital of Senegal, where a series of documents and initiatives on cooperation are expected to be released, including a vision for China-Africa cooperation through 2035.

The FOCAC will also likely focus on China-Africa cooperation in more areas such as climate change, analysts said.

"Chinese companies have participated extensively in China-Africa anti-epidemic cooperation. As a powerful supplement to inter-governmental assistance, companies from different fields gave full play to their unique advantages such as fast decision-making and strong flexibility to fully demonstrate their effectiveness, expertise and technology," Eric Wang Xiaoyong, vice chairman and secretary general of the China-Africa Business Council, told the Global Times in a recent exclusive interview.

Since the outbreak of the epidemic, China and African countries have united and helped each other and fought side by side, Wang said. Both sides have played an important role in the fight against the epidemic and contributed to solving this global public health problem.

As of November 12, China had provided over 1.7 billion doses of COVID-19 vaccine to more than 110 countries and organizations, including 50 African countries and the African Union Commission, and is striving to provide a total of 2 billion doses by the end of this year, according to the white paper titled "China and Africa in the New Era - A Partnership of Equals" released by the State Council Information Office on Friday.

As of August, funds and materials had been donated to 20 countries in Africa and the African Centers for Disease Control and Prevention via the China-Africa Business Council, according to Wang.

In addition to donating epidemic prevention materials, Chinese companies have brought their products and technologies to Africa, said Wang.

"Chinese companies have used their strong capabilities in infrastructure to play an active role in the construction of African anti-epidemic facilities, helping Africa establish and transform a number of medical institutions that meet the conditions for fighting the epidemic," Wang noted.

On Friday, the main structure of the China-Aided Project of Africa CDC Headquarters Building (Phase I) - the first modern Center for Disease Control and Prevention in Africa - located in a southern suburb of Ethiopia's capital of Addis Ababa, finished the capping process.

The project, once completed, will become the first pan-African Center for Disease Control and Prevention on the African continent, fully equipped with modern administrative, experimental and other supporting facilities, enhancing Africa's disease prevention and monitoring capability as well as its responsiveness to epidemic emergencies, and strengthening the continent's public health system and capacity.

A spokesperson of CCECC told the Global Times that the project is an important part of the "Health Care Initiative" within the FOCAC framework, representing a landmark building embodying China-Africa friendship and solidarity, and an important step in building a stronger China-Africa community with a shared future.

Regarding the so-called "debt trap" rhetoric frequently hyped by the West, Wang said it is baseless. "No African country has fallen into a 'debt trap' because of cooperation with China, but African people and the media are vulnerable to the 'debt trap' theory, triggering local doubts about Chinese investment, and even being used to deliberately incite opposition. This requires our high attention and caution."

Especially since the Biden administration is paying more attention to the African continent, as the US seeks to compete with China and reconsider the strategic value of Africa, "we need to heed any US move to affect China-Africa cooperation," he noted.

"In accordance with the development needs of Africa and the increasing debt burden of African countries due to the epidemic and other reasons, we have optimized the financial support structure, advised financial institutions to select cooperative projects, and continued to provide credit funds," Chinese Vice Minister of Commerce Qian Keming said in a recent press conference.

Many infrastructure projects have been completed, which will significantly improve connectivity in Africa, Qian said.

Optimistic about the bright future of China-Africa cooperation, Wang said that the fundamental way to solve the debt problems of African countries is to help and support them to enhance their independent capabilities and achieve greater development.

In the first nine months of 2021, the indicators of China-Africa economic and trade cooperation showed an overall upward trend. Trade reached $185.2 billion, an increase of 38.2 percent year-on-year, the highest level in the same period in history.

China's direct investment in Africa was $2.59 billion, up 9.9 percent on a yearly basis, exceeding the level of the same period in 2019 before the epidemic, data from the Commerce Ministry showed.