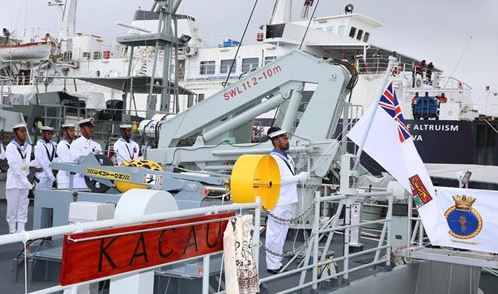 A China-aided hydrographic survey vessel was handed over Friday to the Fijian Navy, witnessed by representatives from both countries.The China-aided hydrographic survey vessel Kacau (a Fijian seabird), equipped with high-tech equipment for hydro detection, could carry out hydrographic and maritime surveys, providing detection data and real-time information.Speaking at the hand-over ceremony at the Stanley Brown Naval base here on Friday, Huang Xuehu, charge d'affaires of the Chinese embassy in Fiji, said that this is a great moment for the bilateral relations between China and Fiji.The vessel is a result of cooperation between the Fijian and Chinese governments as well as the Fijian Navy and People's Liberation Army Navy."China and Fiji have profound traditional friendship. With the joint efforts of both sides, the mil-to-mil exchanges are always highlighted and witness all kinds of tests. We have vast cooperation in equipment, training and personnel exchanges," Huang said."This vessel is a symbol of our good relations, a manifestation of China-Fiji comprehensive strategic partnership featuring mutual respect and common development."He said that China looks forward to working with Fiji to seize the tremendous opportunity, continuing to consolidate mutual trust, expanding exchanges and promoting cooperation, so as to strive for the greater development of China-Fiji comprehensive strategic partnership.For his part, Inia Seruiratu, Fiji's minister for defence and national security, thanked China for donating the vessel."I wish to thank the Chinese government for donating this vessel, which is the latest contribution the Chinese government has made to help keep our seas safe, respond to natural disasters, and effectively combat a changing climate," he said.The minister added that the vessel will further elevate Fiji's regional standing as a hub for connectivity, maritime transportation and trade.A Chinese military delegation led by Senior Colonel Li Jiandang attended the hand-over ceremony, which is also participated by Fiji's former president Ratu Epeli Nailatikau and the Fijian Military Forces's Commander Rear Admiral Viliame Naupoto.