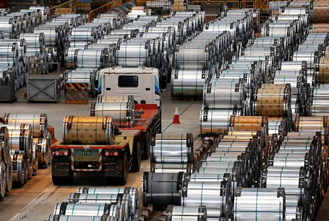 China aims to meet its target for reducing steel production capacity two years earlier than planned, the industry ministry said in a statement on Wednesday, as the world's top steel producer ramps up its years-long push to reduce excess output.The original plan called for reducing 150 million tons of steel production capacity by 2020.However, China will face more pressure in tackling overcapacity as strong prices reduced steelmakers' willingness to cut capacity, the Ministry of Industry and Information Technology (MIIT) said.China has said several times that signs of the addition of new capacities are looming and the risk of bringing induction furnaces back to production still exists."Strictly preventing the addition of new capacity will be the key to successfully pushing the structural supply-side reform in the steel industry in 2018," the ministry said.China will begin carrying out checks in the first half of this year on closed induction furnaces to prevent them from resuming production, the ministry said.MIIT also urged local authorities to step up investigations and ban the addition of new capacity in any form.Last month, China issued stricter rules for building new steel production capacity to replace obsolete facilities. The move underscored China's determination to curb growth in its massive steel sector."The surplus to be shut this year isn't hard, but the main task is consolidating the results and prevent closed mills from resuming production. Also, there is concern that the tough capacity swap rules may not be implemented strictly," said Kevin Bai, an analyst with CRU in Beijing.The rising steel prices helped to push 2017 profits at medium- and large-sized steel mills up sevenfold from the previous year to 177.3 billion yuan ($28.32 billion), the ministry said.Sales revenue rose 34.1 percent from a year ago to 3.69 trillion yuan, the ministry said.China's environmental crackdown, supply-side reform and the closure of lower-end induction furnaces have pushed steel rebar prices up by about 38 percent in the past year. However, the improving market conditions have lured some closed mills to resume production.China shut down 115 million tons of steel capacity between 2016 and 2017, and closed 140 million tons of induction furnaces that use scrap metal to make steel.In 2017, China produced a record volume of steel at 832 million tons. China will encourage companies to build more electric furnaces to process scrap and urge companies to move production out of sensitive regions, including northern Beijing, Tianjin, and Hebei province, it added.