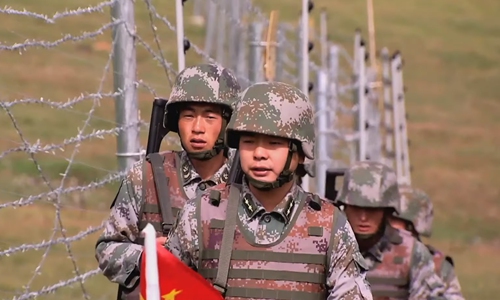 Many netizens commented that the documentaries disclosed rare video footage on terrorist attacks that Xinjiang had suffered, fully reflecting the severe threat of terrorism Xinjiang was facing. They also said Western media that criticized China's Xinjiang policies should watch these videos carefully.

But many Western media, especially those which tried to hype the "leaked documents" on vocational education and training centers in Xinjiang in recent weeks, kept silent over the heated discussions on the Chinese mainland generated by the documentaries.

Chinese mainland experts said that some Western media outlets selectively report what fits their stereotypes and interests. These outlets also went great lengths to slander on Xinjiang. Their silence on the documentaries showed their double standards in regards to China's Xinjiang issues, they said.

Two of the three documentaries were newly made and aired on CGTN on Thursday and Saturday respectively, telling of the overall counter-terrorism work in Xinjiang and ETIM's role in inciting terrorist attacks in China's Xinjiang and other Chinese cities.

One documentary, initially aired in April 2018, was streamed again on CGTN on Friday night, deploring the human rights crisis created by the US in the Middle East since 2003.

CGTN also uploaded these two documentaries on YouTube and the first episode, "Fighting terrorism in Xinjiang" was watched more than 150,000 times.

Some internet users commented on Sina Weibo that they had visited Xinjiang and enjoyed the splendid landscape, friendly atmosphere and safety, but they had no idea that Xinjiang used to suffer such grim terrorism and extremism threats.

Leonard Brownies, one  internet user from abroad commented on Twitter after watching one documentary that "This is FACT. Some stupid Western fake news media should see this."

The documentaries were "very touching and reflect truth on Xinjiang in a clear way," Erkin Oncan, a Turkish reporter, told the Global Times on Sunday.

"Unlike the Western propaganda news, the documentaries tell what was really happening in Xinjiang by original videos and remarks of witnesses and participants of terrorist attacks."

Pretending to be blind

Few Western media outlets reported discussions about the documentaries on the Chinese internet as of press time.

This is in sharp contrast to extensive coverage by Western media such as the 17 media partners of the International Consortium of Investigative Journalists (ICIJ) on "leaked government files" on Xinjiang.

Erkin said that he was not surprised to see many Western media "pretend to be blind" at the Chinese documentaries as their reports on Xinjiang were in line with "some Western countries' political agenda, not with the principles of journalism."

By making public rare video footage of terrorist attacks including the Urumqi riots on July 5, 2009 and the Tiananmen Square terror attack on October 28, 2013, "the documentaries tear the hypocrisy mask off the US," said Li Wei, a counter-terrorism expert at the China Institutes of Contemporary International Relations in Beijing.

"It claims to protect human rights but supports terrorist groups and interferes in China's domestic affairs."

For some Western media and US politicians, who know clearly the previous severe terrorist threat in Xinjiang and still chose to smear China's anti-terrorism policies in the region, they would ignore the documentaries on purpose, Li asserted.

"They give no care to the truth but want to hype Xinjiang issue to make troubles for China," he said..

Li said that the bloody scenes of terrorist attacks, the cruelty of terrorists and the tragedy of innocent people's deaths not only left a strong impression on the audience but also reminded people the hefty price the regional government and local people have paid for restoring peace and stability in Xinjiang.

Li told the Global Times that these documentaries target people who were fooled by fake news of some Western media but wanted to know true stories of Xinjiang.

"I believe that people who have conscience would get to know and give just comment on China's strenuous efforts on countering terrorism and on protecting local residents' human rights in Xinjiang," said Li.