China and Malta to contribute to open, free world economy 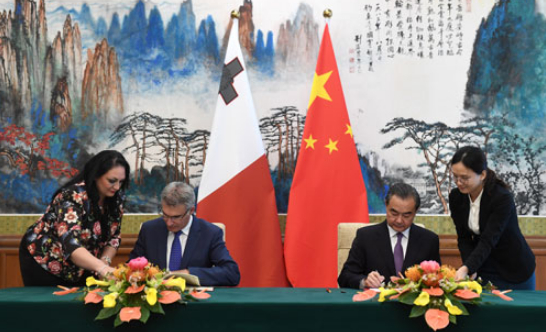 "It is necessary for China and Malta to strengthen cooperation, jointly oppose unilateralism and trade protectionism, building an open world economy and a community with a shared future for mankind," Wang Yi said.

Chinese State Councilor and Foreign Minister Wang Yi made the remarks during a meeting with his Maltese counterpart, Carmelo Abela, on Thursday in Beijing.

The two countries have become a model of harmonious coexistence among countries with the different population, different cultural traditions and different social systems since the establishment of diplomatic ties between China and Malta, Wang said.

He also vowed that China is willing to make the Belt and Road a new platform for all-round cooperation between China and Malta and push for greater development of bilateral relations.

Abela responded that the friendship between the two sides has been strong and stable since the establishment of diplomatic relations between Malta and China 46 years ago, hailing that China has long pursued the policy of equality for all countries, no matter major or small.

Malta is also ready to play a positive role in promoting the smooth development of the relations between China and Europe, he noted.