BEIJING, Aug. 24 (Xinhua) -- China plans to plant 500 million mu (about 33.33 million hectares) of forests and grasslands in the next five years -- 100 million mu per year -- to help achieve its carbon emission reduction goals, according to the country's forestry authorities. 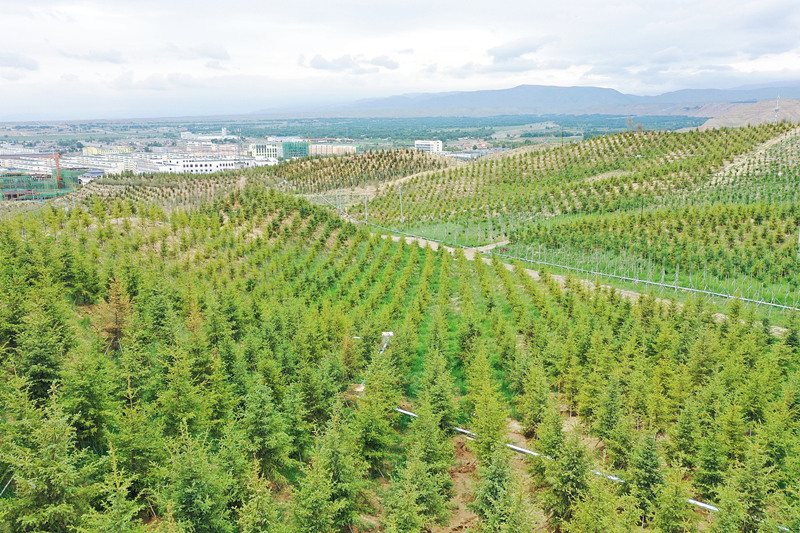 The task includes planting 54 million mu of trees and 46 million mu of grass each year, said Zhang Wei, head of the ecological protection and restoration department of the National Forestry and Grassland Administration (NFGA).

The afforestation plan is part of China's efforts to fulfill its commitment to peaking carbon dioxide emissions by 2030 and achieve carbon neutrality by 2060, as forests and grasslands are important carbon sinks that absorb and store carbon dioxide from the atmosphere.

China aims to increase its forest coverage rate to 24.1 percent and its grassland vegetation coverage to 57 percent by 2025, as outlined in the country's 14th Five-Year Plan (2021-2025) on the protection and development of forests and grasslands.

The carbon peak and carbon neutrality targets are a huge opportunity for the development of forests and grasslands, as the country eyes the expansion of forest coverage and the improvement of forest quality to facilitate attainment of the climate goals and contribute to global ecological security.

The country has created the world's largest planted forests, raising its forest cover from 12 percent in the early 1980s to 23.04 percent in 2020, with its forest stock volume hitting 17.56 billion cubic meters.

As a result of sustained forest conservation and tree planting efforts, at least 25 percent of the global foliage expansion since the early 2000s came from China, according to a study published in the journal Nature Sustainability in 2019.

In addition to afforestation, Zhang said work will be carried out to improve the quality of forests and their ability to reserve carbon. He said work will be done to protect natural resources to reduce carbon pool loss, and forest bioenergy will be developed. Construction materials such as steel and cement will be replaced with bamboo and timber to cut emissions.

In Inner Mongolia, an important ecological barrier in north China, an average of 600,000 hectares of land have been afforested annually over the past five years, raising the region's forest coverage rate to 22.1 percent.

Local forestry authorities in the region's Greater Hinggan Mountains forest area have been piloting a carbon sink trading project since 2014, allowing companies that surpass their emission caps to purchase carbon sinks in the area to offset excess emissions.

By April this year, the transaction volume of the carbon sink trade in the area totaled 4.9 million yuan (about 756,114 U.S. dollars).

Zhang said that the participation of private capital in the carbon emissions reduction campaign will be encouraged, and the government is ready to help key regions, organizers of major events, enterprises and the public to achieve carbon neutrality with forest and grassland carbon sinks.