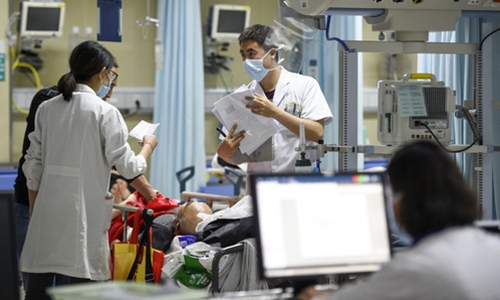 China's top legislature on Saturday voted to adopt a law for the improvement of basic medical and health care, including protecting the safety of medical personnel after a Beijing doctor was killed by a patient's relative this week.

The Basic Healthcare and Health Promotion Law stated that the personal safety of medical personnel and their dignity are inviolable. It prohibits any organizations or individuals from threatening or endangering the safety of medical workers.

The law is the country's first fundamental and comprehensive legislation on basic medical and health care, according to the Xinhua News Agency. Lawmakers approved the law at the end of a six-day bimonthly session of the National People's Congress Standing Committee.

The discussion around the safety of medical personnel has gripped China in the past few days. Doctor Yang Wen of Civil Aviation General Hospital in Beijing died early morning on Wednesday after she was slashed in the neck Tuesday morning.

The alleged perpetrator , a relative of Yang's 95-year-old patient, has been arrested, the People's Procuratorate of Beijing said on Friday.

Several incidents of attack on doctors by patients and their relatives occurred in China in the past years.

On October 22 this year, a doctor in the People's Hospital of Gansu Province in Northwest China was stabbed to death by one of his patients.