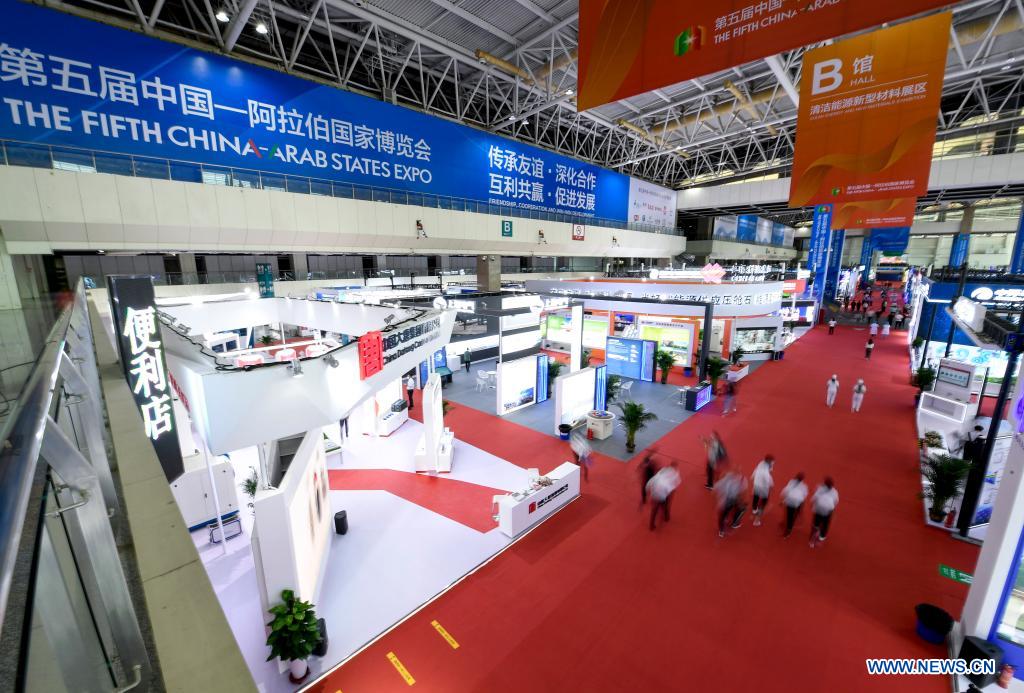 Held both online and offline for the first time in history, the four-day event will feature trade fairs and forums on the digital economy, clean energy, water resources, modern agriculture, green food, cross-border e-commerce, and tourism.

More than 1,000 domestic and overseas enterprises have registered as exhibitors for offline and virtual events at the expo this year.

China, now the Arab states' largest trading partner, has the confidence to further expand cooperation with the countries in the digital economy, new energy, artificial intelligence, and other emerging fields, said Chinese Vice Commerce Minister Qian Keming via videolink at the opening ceremony.

Qian said China and Arab states have cooperated and helped each other during the pandemic, and their economic cooperation and trade exchange reached a new level.

According to statistics of the ministry, China-Arab trade volume reached 239.4 billion U.S. dollars in 2020, during which China imported 250 million tonnes of crude oil from Arab states or half of the country's total crude oil imports last year.

"Facing the pandemic and the great change unseen in a century, China and Arab states now have more urgent needs than ever to walk hand in hand and seek common development, as well as tap the business opportunities and deepen cooperation," he added.

Sponsored by the Ministry of Commerce, the China Council for the Promotion of International Trade, and the Ningxia regional government, the expo has attracted more than 5,000 enterprises from around 110 countries since its inauguration in 2013, with about 940 cooperative projects signed.

Moroccan Prime Minister Saad Eddine El Othmani said via video that Arab countries and China are highly complementary in their economies and enjoy broad prospects for cooperation. He noted that Morocco has actively participated and played a constructive role in the Belt and Road Initiative (BRI) and has seen great progress in the country's infrastructure.

Stressing that new opportunities will be brought to countries along the Belt and Road, Tunisian Foreign Minister Othman Jerandi said joint efforts to safeguard regional security and stability are vital for the further development of the initiative.

Tunisia expects to deepen cooperation with China in areas like tourism and the digital economy, he said.

Kazakhstan's First Deputy Prime Minister Alikhan Smailov said that the BRI has proven to be practical and successful, and the proposal of building a digital Silk Road and a green Silk Road will make contributions to the low-carbon development of the world.