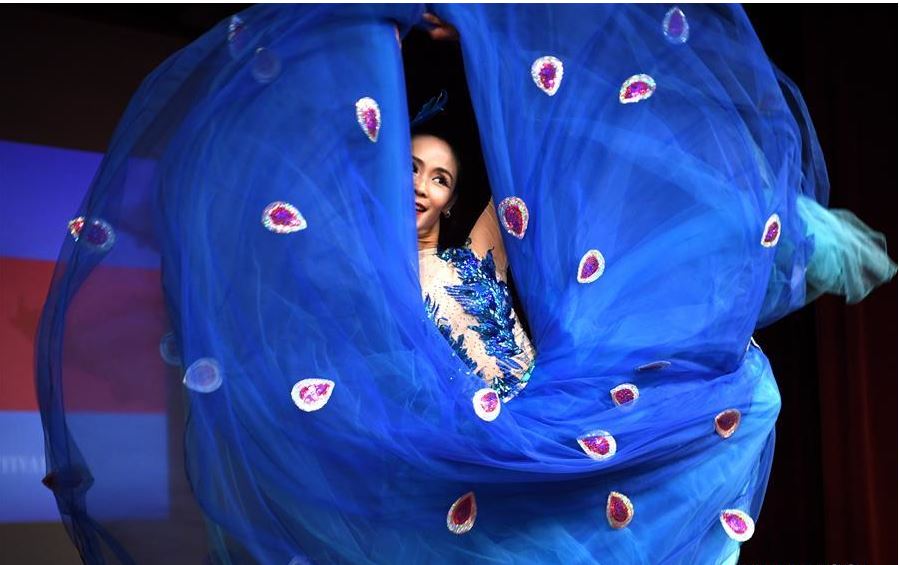 Yang Yang, a young Chinese dancer performs on the opening ceremony of The Fifth "Across the Pacific: China Arts Festival", in San Francisco, the United States, on Sept. 7, 2018. (Photo: Xinhua)

To continue till Oct. 21, the festival will be held in the San Francisco Bay Area, Sacramento in northern California, Portland in Oregon State, and Las Vegas in Nevada State.

"Culture is not only the bridge of soul and feelings, but also the bond that strengthens mutual understanding and trust," Chinese Consul General Wang Donghua said at the opening ceremony in the Chinese Consulate General in San Francisco.

Since China and the United States established diplomatic relations 40 years ago, their relationship has become the most dynamic and important bilateral one in today's world, in which cultural exchanges play an irreplaceable role, Wang said.

The festival will build a bridge of friendship across the Pacific for the people of China and the United States, he added.

"It is through music and cultural events that we as people can understand each other," Conway Jones, honorary chair of the Golden Gate International Choral Festival, said.

Jones gave the example of the 2018 Golden Gate International Children's and Youth Choral Festival, which was held in Oakland in northern California in July. It brought together more than 500 children from around the world, including from Shanghai and Hong Kong.

The children are "diplomats" responsible for exchange of culture and values around the world, he said.

"I have been learning Chinese for eight years," the 12-year-old said. "I love the fantastic Chinese food and like to listen to Chinese music."

Jean Kellogg, executive director of the Merola Opera Program affiliated with San Francisco Opera, said she and her team are proud to be part of the Across the Pacific: China Art Festival.

The all-expenses-paid Merola program, now in its 61st year, trains young artists. In the past 10 years, it has trained 26 young artists of Chinese descent, many of whom are now rising stars in the operatic world, Kellogg said.

The festival is part of the China-US cultural communication and exchange projects sponsored by the Chinese Ministry of Culture and Tourism.