China on Friday said the 15th Senior Officials' Meeting on the Implementation of the Declaration on the Conduct of Parties in the South China Sea (DOC) will be convened on June 27 in Changsha in Central China's Hunan Province. 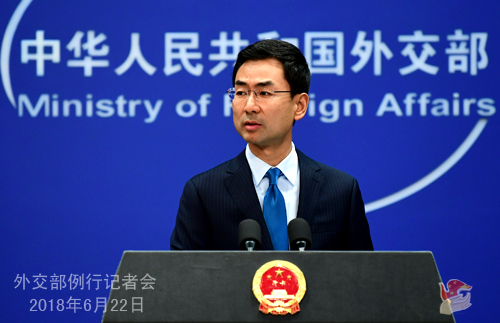 According to Chinese Foreign Ministry spokesperson Geng Shuang, Chinese Vice Foreign Minister Kong Xuanyou and senior diplomats from ASEAN countries will attend the meeting. Prior to the meeting, the 24th Joint Working Group meeting on the Implementation of the DOC will be held.

China and ASEAN countries will continue to discuss issues including implementation of the DOC, maritime pragmatic cooperation, and negotiation of the code of conduct in the South China Sea (COC), Geng said.

Thanks to the joint efforts of China and other countries in the region, the current situation in the South China Sea has been stabilized and maintains positive momentum, said the spokesperson.

All parties will continue their efforts in pushing forward dialogue and cooperation, strive for more outcomes and progress, so as to create favorable conditions for consolidating the current sound situation, Geng said.

The DOC, signed in 2002 by China and ASEAN countries, outlines the most important principles in the management of disputes on the South China Sea, and consultations for the COC were launched by the two sides in 2013. Both are aimed at safeguarding peace and stability in the region.