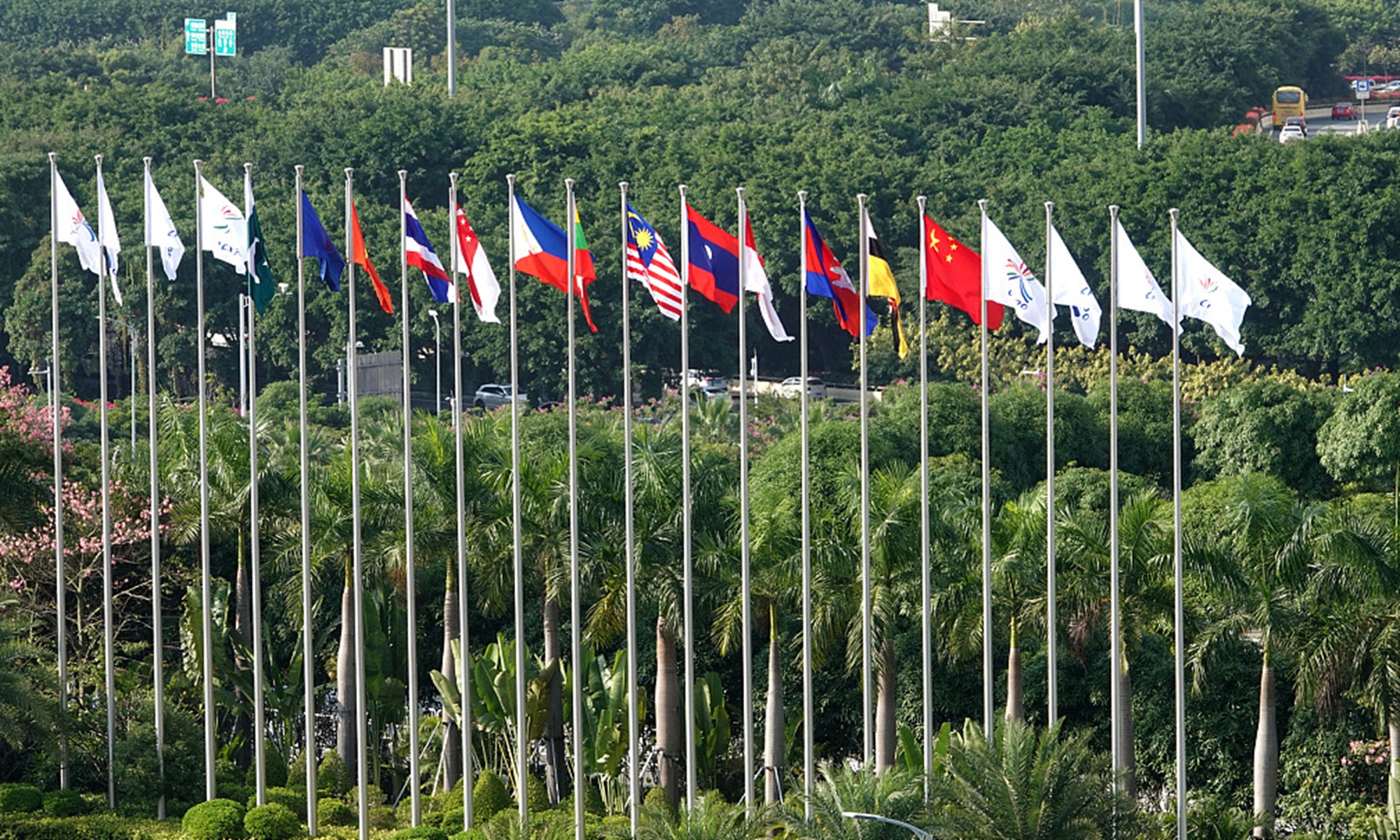 The in-person meeting between foreign ministers of China and ASEAN countries scheduled to be held in Chongqing from Monday to Tuesday carries "special significance," as China and the bloc are set to have comprehensive discussions on jointly weathering the pandemic, boosting economic development, moving bilateral ties forward without being wavered by extraterritorial forces, and other issues, observers said.

This year marks the 30th anniversary of the establishment of dialogue relations between China and ASEAN, which sees special significance for bilateral relations to build on past achievements and pursue new progress, Wang Wenbin said.

The spokesperson noted that the face-to-face meetings under the ongoing grim COVID-19 situation reflect countries attach great importance to and hold high expectations for China-ASEAN relations under the new circumstances.

"The two sides now are facing several urgent issues to negotiate over, and fighting COVID-19 tops the list," said Chen Xiangmiao, an assistant research fellow at the National Institute for South China Sea Studies, who predicted that China and ASEAN countries will step up their cooperation on vaccine sharing in order to help the bloc staunch the rising number of viral infections.

When Wang Yi met with Luhut Binsar Pandjaitan, Indonesian president's special envoy and the country's coordinator for cooperation with China in Guiyang, Southwest China's Guizhou Province, on Saturday, the two sides agreed to continue to deepen cooperation across the entire vaccine industrial chain, including research and development, production and distribution, and China will help Indonesia build a regional vaccine production center.

Chen said the next pressing issue on the agenda between China and the bloc is economic resurgence. The expert said that economic cooperation between the two is continuing its strong momentum after the signing of the RCEP, the world's largest trade deal, which includes China and 10 members of the bloc. Overtaking the EU, ASEAN jumped to become China's top trading partner in 2020.

Chen said tourism is an important sector in cooperation between China and ASEAN countries. "Yet such cooperation has been frozen by the ravaging pandemic. So I believe how to resume normal people-to-people exchanges between those countries will be targeted by the upcoming meeting," Chen said.

Analysts said that as the world's economy has been threatened by both the pandemic and rising protectionism, the LMC has played important part in boosting regional economic stability and helping to weather US unilateralism.

2021 marks the 30th anniversary of the dialogue relations between China and the 10-member Association of Southeast Asian Nations (ASEAN).The past three decades have seen China-ASEAN relations grow closer and stronger despite trials and hardships.

The time for discussion about a vaccine passport between China and ASEAN countries has come, although it will take time to happen, said Bi Shihong, professor at the Center for China's Neighbor Diplomacy Studies and School of International Studies, Yunnan University. He noted that currently, countries in the bloc have seen relatively low vaccination rates, and a vaccine passport can only be launched when both sides agree and have vaccination rates that are up to "scientific standards."

Yet the relationship between China and certain ASEAN countries has encountered a bumpy road recently, with Beijing and Kuala Lumpur this week bickering about China's dispatching of 16 aircraft to the South China Sea for a routine flight, which Malaysia called "intrusion."

Wang Wenbin on Wednesday refuted these accusations at a regular press conference, responding that the Chinese Air Force held a routine training operation in the southern Nansha Islands in the South China Sea. Wang said the training did not target any country, and the Chinese Air Force strictly abided by international law without entering the airspace of other countries.

Experts brushed off the risk that such a small incident will undermine China's ties with Malaysia or countries from this bloc. "Regarding the South China Sea issue, Malaysia, and most ASEAN countries have maintained a smooth negotiation channel with China… and surely how to build up a better risk control mechanism will be discussed by officials from those countries," Chen said.

Relevant countries see clearly that quarrels on South China Sea are not the biggest threat to regional stability; it is the US, whose warships frequently sail through the sensitive waters and try to force ASEAN countries take sides to confront China, observers noted.

ASEAN countries did not dance to the US' tune on many sensitive issues, despite Washington's frequent calls on the bloc to disrupt China's neighboring diplomacy, said Bi, noting that those countries know that US promises are just "empty checks."

"Take the COVID-19 assistance as an example, the US provides neither anti-pandemic materials nor vaccines for ASEAN countries, which keeps their eyes open to the US' real intentions," Bi said.