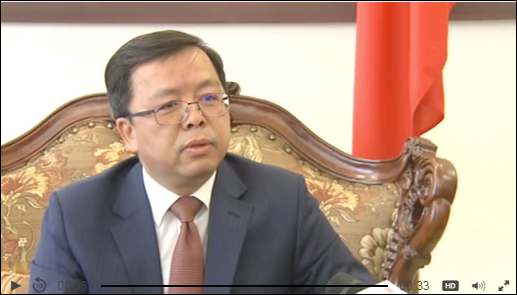 Huang Xilian, Chinese ambassador to the ASEAN, said in a recent interview with CCTV that China-ASEAN ties have transcended bilateral scope and have regional significance.

Huang made the remarks ahead of the annual ASEAN Foreign Ministers Meeting and other related meetings which will sit in Singapore from Thursday to Saturday.

China-ASEAN relations have become an important force for the countries in the region to jointly meet global challenges and promote regional peace and stability, stressed Huang.

One of the major issues at this year's ASEAN cooperation ministers' meeting is how to deal with the challenges posed by trade protectionism, he added.

Speaking at the headquarters of the ASEAN Secretariat in Jakarta, Huang said he hoped that the Regional Comprehensive Economic Partnership can be concluded at an early date.

"ASEAN countries have come out and said to work together to safeguard the multilateral trading system and jointly promote free trade in the region. Recently, Secretary-General of ASEAN Dato Lim has repeatedly stated that in the context of trade protectionism, ASEAN should show its determination to oppose trade protectionism to jointly safeguard the multilateral trading system. China and ASEAN countries have a lot of consensus in this regard," he noted.

China has contributed to the security and stability of the ASEAN region, said the ambassador.

"In November 2017, China and ASEAN countries at the 20th China-ASEAN Leaders' Meeting in Manila announced that they will start consultations on the text of the Code of Conduct (COC) in the South China Sea. China and ASEAN have also held joint working group meetings. Under the guidance of China, the South China Sea is moving towards a new starting point for peace and prosperity," he said.

China has been the largest trading partner of ASEAN for the past nine years.

Mutual investment over the past 15 years totaled more than 200 billion US dollars. More than 4,000 enterprises were established through direct investment, creating over 300,000 jobs. And personnel exchanges have also risen dramatically.