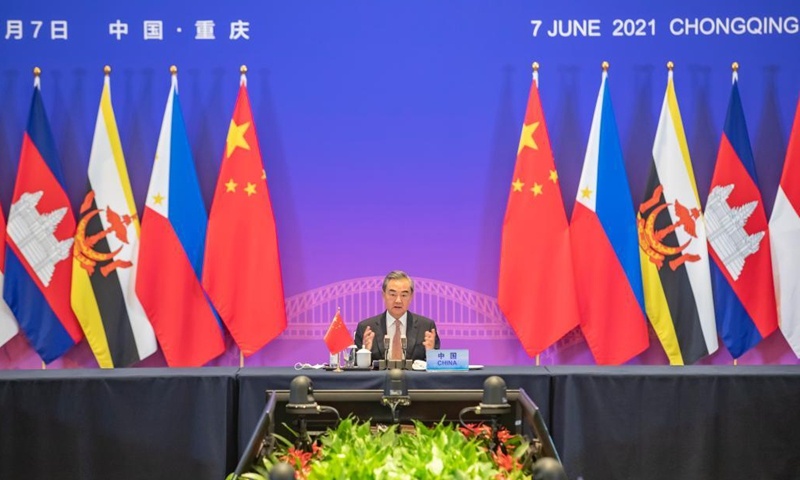 China and member countries of ASEAN have expanded and deepened their mutual interests by properly managing differences over the past 30 years, creating the most successful example of cooperation in the Asia-Pacific region with many groundbreaking projects that demonstrate the mutual desire to maintain regional peace and stability while resolutely objecting to West's interference and provocation, Chinese observers said after the first in-person meeting of foreign ministers between China and ASEAN since the pandemic began.

Analysts stressed that China and ASEAN members have strengthened their relations out of the natural and strong motivation and forward momentum of cooperation and maintaining regional stability. The US' evil intention of besieging China using ASEAN members is just a pipedream and its "knife of geopolitics" can never cut the ties between China and regional bloc.

Chinese State Councilor and Foreign Minister Wang Yi on Monday and Tuesday met with foreign ministers of ASEAN countries in Southwest China's Chongqing for a Special ASEAN-China Foreign Ministers' Meeting in Celebration of the 30th Anniversary of Dialogue Relations.

In his speech, Wang spoke highly of the cooperation between the two sides over the past 30 years, saying the two sides always give top priority to each other in foreign relations, also making suggestions for the future development of China-ASEAN relations.

The two sides may explore ways to elevate China-ASEAN relations to a comprehensive strategic partnership, demonstrating the will and determination of unity and cooperation and setting a new benchmark for China-ASEAN cooperation, Wang said.

The two sides may also explore the establishment of an expert group to strengthen cooperation in vaccine research and development, production, procurement, inoculation and supervision, and work to build a regional center for vaccine production and distribution, to make vaccines more affordable and accessible in the region, Wang said.

Xu Liping, director of the Center for Southeast Asian Studies at the Chinese Academy of Social Sciences, told the Global Times on Tuesday that China-ASEAN relations are the most successful and dynamic partnership in the Asia-Pacific region and have created many multi-dimensional cooperation mechanisms.

China and ASEAN members will promote reopening borders and resuming tourism based on mutual recognition of health codes and vaccination, and these measures will be a demonstration of people-to-people exchanges in the post-COVID-19 era, Xu said.

China is willing to further elevate bilateral relations to a comprehensive strategic partnership, indicating the two sides have expanded and deepened comprehensive cooperation in the next 30 years, Xu said, noting that the direction of future development lies in the digital economy, 5G, poverty alleviation, environmental protection and climate change, as well as reconstructing supply chains under the Regional Comprehensive Economic Partnership (RCEP). Overtaking the EU, ASEAN jumped to become China's top trading partner in 2020.

ASEAN countries highly value China-ASEAN cooperation. According to the Straits Times, Singaporean Foreign Minister Vivian Balakrishnan said on Monday that the ministers highlighted the "very effective" cooperation between ASEAN countries and China in battling COVID-19, pointing to China's provision of essential medical supplies and support for vaccination across the region.

China and ASEAN countries also held a senior officials' meeting on the implementation of the Declaration on the Conduct of Parties in the South China Sea (DOC) in Chongqing, agreeing to resume as soon as possible the second reading of the Single Draft Code of Conduct in the South China Sea (COC) Negotiating Text and working for the early conclusion of negotiations.

When meeting with Philippine Foreign Secretary Teodoro Locsin, Wang said China has never attached any political conditions to aiding the Philippines, nor does it have any so-called "trap."

Saying that some differences between the two sides exist over the South China Sea issue, Locsin noted they should not affect the rising bilateral friendship and practical cooperation in various fields.

Xu said that the South China Sea is not the Caribbean Sea and should have nothing to do with extraterritorial countries. Further accelerating the negotiations on the issue showed the political determination of both sides in safeguarding the stability of the region.

Xu said such claims were made purely out of ulterior motives and seriously underestimated the thousands of years of historical and cultural connections between China and Southeast Asian countries.

Fan Hongwei, director of the Center for Southeast Asia Studies at Xiamen University, told the Global Times on Tuesday that it is the US, which out of a cold war mentality, has been interpreting China's every move as a challenge and threat to its global leadership and thus attempted to use China's neighbors, including ASEAN countries, to besiege China.

Chinese analysts said that the US' strategic intention of forcing ASEAN countries to take sides between China and the US runs counter to the fundamental interests of ASEAN countries which have been seeking a balance between major powers.

What the US wants is never practical cooperation with ASEAN, but to impede cooperation between China and ASEAN to serve its strategic purpose of containing China, analysts said.

Xu said that ASEAN countries are fully aware of this and the US' goal will never work out in the region.

On the Myanmar issue, Wang said that China is willing to continue to work with ASEAN countries to jointly urge all parties in Myanmar to put the interests of the people first, exercise calm and restraint and eliminate all kinds of violence, encourage all parties in Myanmar to engage in political dialogue within the constitutional and legal framework, restart democratic transformation and jointly urge all countries to abide by the principles of the UN Charter and avoid unilateral sanctions and undue involvement.

Fan said that China has maintained a good relationship with both Myanmar military and the National League for Democracy, and as one of the permanent members of the UN Security Council, China plays an important role in maintaining world and regional peace and stability.

The special foreign ministers' meeting in Chongqing is a platform China offered for regional countries to discuss and mediate the Myanmar issue, Fan said, noting that China will continue to provide space for all parties in Myanmar to solve the issue through peaceful means.

Non-interference in internal affairs is the mainstream practice in Asia, and China and ASEAN countries jointly oppose unilateral sanctions. Western sanctions, out of ideology, will not do any good for the easing of the Myanmar situation, Fan said.

Just two days before the Chongqing meeting, Myanmar leader Min Aung Hlaing met with Chinese Ambassador to Myanmar Chen Hai in Nay Pyi Taw. Min Aung Hlaing said that the Myanmar side is willing to work with ASEAN to safeguard the domestic stability of Myanmar and implement the relevant consensus. Myanmar sees China as an important neighbor and is willing to maintain communications with China. In turn, Chen said China is willing to continue to play a constructive role, supporting the implementation of the consensus reached between ASEAN and Myanmar.