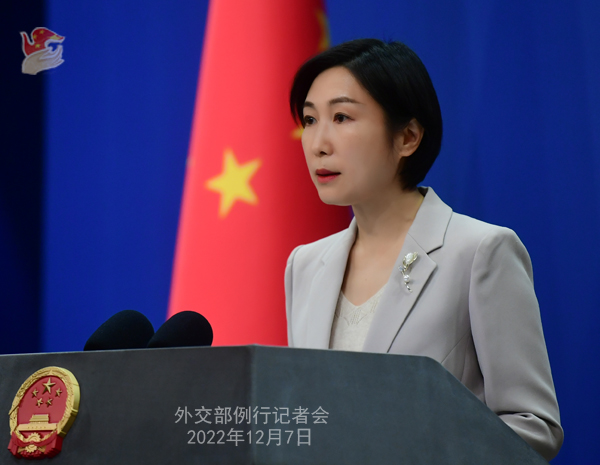 China attaches great importance to biodiversity protection. Since it assumed the presidency of the 15th meeting of the Conference of the Parties (COP15) to the UN Convention on Biological Diversity (CBD), China has advanced the COP15 process with the highest level of political will and most vigorous practical actions, a strong contribution China has made to global biodiversity protection, a Chinese Foreign Ministry spokesperson said on Wednesday.

Spokesperson Mao Ning made the remarks at a regular press conference when answering a question related to China's goals and expectations for COP15.

In October last year, China held the Leaders' Summit of COP15. Chinese President Xi Jinping and the leaders of eight other Parties as well as UN Secretary-General Antonio Guterres attended and addressed the summit, which significantly galvanized political will at the meeting, Mao said.

At the event, Xi put forward a four-point proposal to start a new journey of high-quality development for humanity and announced a series of measures China would take as the host country, including the initiative to invest 1.5 billion RMB (about $215 million) to establish a Kunming Biodiversity Fund, the spokesperson said.

Since the first phase of COP15 began, China has chaired nearly 40 COP Bureau meetings and more than 100 bilateral and multilateral meetings at various levels for consensus building, she said.

Besides, China has sought to engage and coordinate with countries for the success of the second part of the meeting on important occasions including the UN, the G20 and the UN Climate Change Conference in Sharm el Sheikh, which has served to boost the political momentum of global biodiversity governance, she added.

The second part of COP15, scheduled for December 7 to 19, will soon begin in Montreal, Canada. China will continue to play its role as chair of COP15, closely cooperate with all Parties and stakeholders towards the conclusion of the post-2020 global biodiversity framework and successful completion of all items on COP15's agenda, and contribute to the full attainment of the three main objectives of the CBD, namely the conservation, sustainable use and sharing of the benefits of biodiversity, the spokesperson said.