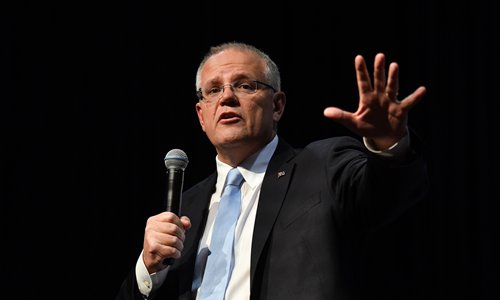 China-Australia ties will overall remain stable but face continuous frictions, Chinese analysts said Sunday after Scott Morrison won a surprise victory in federal elections to become Australian prime minister. Australia's Liberal National coalition under Morrison won a historic victory, taking his party to a third term in government, according to CNN on Saturday. Morrison will continue his tough stance toward China and bilateral ties are unlikely to see radical changes in the short term, Chinese analysts noted. The two sides will also experience continuous political and military frictions, they said. Bilateral relations soured after Australia blocked Chinese telecom equipment maker Huawei from participating in its 5G network construction, citing national security concerns.Although Australia and China share same goals of global economic governance and both sides support free investment and trade facilitation, it is foreseeable that the Australian government will still voice perceived differences on China's ethnic issues, human rights and military issues, Yu Lei, a research fellow at Liaocheng University's Research Centre of Pacific Island Countries in East China's Shandong Province, told the Global Times on Sunday.Yu noted that on military issues, Australia will "fully support" and "implement" the US-backed Indo-Pacific Strategy to pressure and restrain China in the region.Shortly after the election, the administration of US President Donald Trump called to congratulate Morrison. The two leaders reaffirmed the critical importance of the longstanding alliance and friendship between the US and Australia, and "pledged to continue their close cooperation on shared priorities," Judd Deere, White House deputy press secretary, was quoted by the New York Times, as saying. Australia, a close ally of the US, believes that for national security it depends on the US, and at the same time, it's aware of its close economic links with China, analysts said. Thus Canberra seeks to maintain good relations with both powers.The vote of the Chinese community in Australia was an important leverage for an Australian politician in this election and many expressed hopes that the election would have a positive impact on bilateral ties. Morrison was quoted as calling China a "customer" and the US a "friend," which might be a sign of Morrison adjusting his attitude to China, according to Li Haidong, a professor at the China Foreign Affairs University's Institute of International Relations in Beijing. Li said, from Morrison's comments, we could see the different stands of the Australia on China and the US. China is only "indispensable" for Australia as an "economy partner."