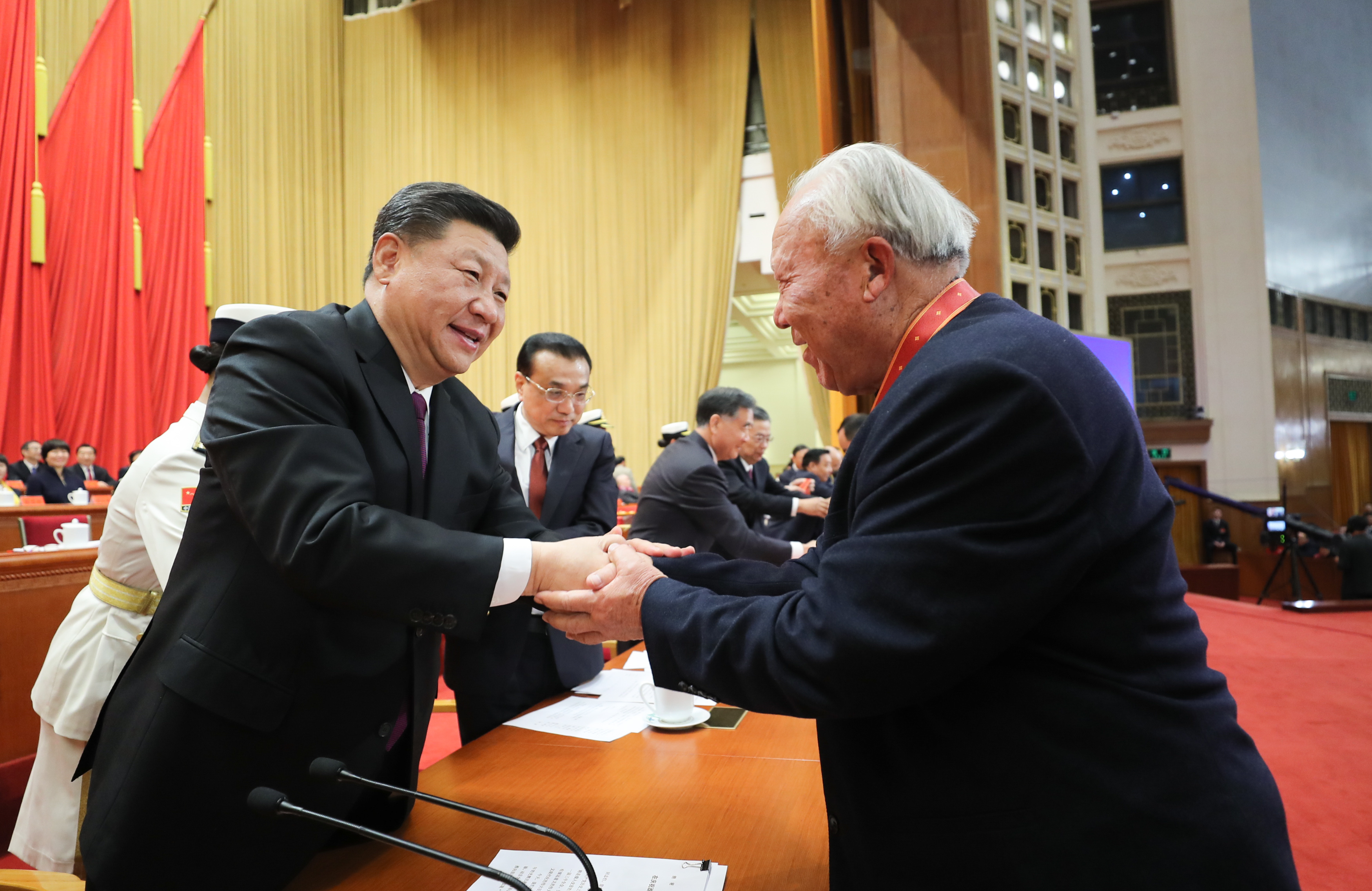 At a gala celebrating the 40th anniversary of China's reform and opening up on Tuesday at the Great Hall of the People in Beijing, 100 Chinese nationals were awarded Reform Pioneer medals, and 10 foreigners received China reform friendship medals, marking China's sentiments on past achievements and what the future holds.

Chinese President Xi Jinping and other national leaders were in attendance for the event which kicked off at 10 am.

Premier Li Keqiang presided over the ceremony. Wang Huning, a member of the Standing Committee of the Political Bureau of the Communist Party of China (CPC) Central Committee, announced the award decisions from the CPC Central Committee and the State Council for distinguished individuals who have made outstanding contributions to the country's reform and opening up.

The list included many great individuals who made significant contributions to China's progress, including Yuan Longping, a Chinese agronomist and educator, well-known for developing the first hybrid rice varieties during the 1970s. Since then, hybrid rice has grown in Africa, South America, and Asia, providing a food source for high-risk famine regions.

Pharmaceutical chemist Tu Youyou, co-winner of the 2015 Nobel Prize in Physiology or Medicine, discovered that artemisinin could be used to treat malaria. It was a significant 20th century breakthrough that saved millions of lives in throughout South Asia, Africa, and South America.

"These award-winners not only contributed to China's reform and opening up but also helped other countries to solve problems. By awarding them, the CPC is announcing to all Chinese people and the world that China's continued reform and opening up not only benefits China but is also a great historical event for human history," Su Wei, a professor at the Party School of the CPC Chongqing Committee, told the Global Times.

Some of the Chinese award-winners have since passed away.

Aircraft designer, Luo Yang, was the head of production and design for the Shenyang J-15 fighter jet. He later became chairman and general manager of Shenyang Aircraft Corporation.

On November 25, 2012, Luo, at the age of 51, died from a sudden heart attack. At the time, Luo was under intense pressure to design the J-15 fighter jet so it could land on an aircraft carrier.

A military expert at a Beijing-based military academy who spoke under condition of anonymity told the Global Times, "Thousands of people like Luo have already given their lives to the country or are still overloaded with work. China is still chasing other countries who have more advanced technology in the military or civil sectors, and it is impossible for a chaser to realize its goal without hard work and sacrifice. There is no shortcut or space for cheating, so the rising power must endure greater sacrifices than the existing ones, and sometimes while existing powers try to contain us."

"Luo was just one of those people fighting for the tougher goals that China holds in the sci-tech area. The Party needs to encourage them since China is still a chaser in many fields, especially in the military industries. On the other hand, the government should pay more attention to the health of people like Luo, because they are the treasure of our country," the expert noted.

Medals were awarded to grass-roots Party cadres such as Sonam Dajie, a Tibetan and deputy secretary for a county Party committee in Qinghai Province.

Dajie worked in Hoh Xil (Kekexili), an isolated region, and at a nature reserve in the northwestern part of the Qinghai-Tibet Plateau in Qinghai Province. He is known for his animal preservation efforts on the Tibetan antelope. In 1994, at the age of 40, he was shot and killed by Tibetan antelope poachers.

Dajie died protecting the environment, and by awarding grass-roots Party cadres like him, the Party hopes to deliver a signal that China's reform and opening up take environmental protection efforts seriously, and China will always uphold this during its future reform, Su noted.

Another grass-roots Party cadre recognized for their outstanding contributions included Bao Xinmin, from Huzhou, Zhejiang Province. A Party secretary for the CPC Committee of Yu village in Anji county, and he was a firm executor of the concept, "lucid waters and lush mountains are invaluable assets."

The idea, first proposed by President Xi, inspired Bao to lead local villagers to shut down cement factories and mines that were causing pollution and replace them with green tertiary industry standards. This movement paved the way for the return of lucid waters and lush mountains and provided locals with huge economic profit.

The people are "the creators of the great wonder of reform and opening up" and "the source of power" to drive the campaign that started 40 years ago, Wang said on Tuesday, Xinhua reported.

"These people helped China to have top IT companies in the world, and they are the source of China's confidence when it comes to competing with the West in the IT sector. Additionally, the success of these people and their companies prove that China's reform and opening up brought great opportunities and development to the private sector. Their potential was activated," said Bai Ming, a research fellow at the Chinese Academy of International Trade and Economic Cooperation, to the Global Times.

The awards office, under the Party central authorities, said the candidates were selected based on local recommendations and after multiple rounds of review. The list of names along with each their biographies was published by People's Daily on November 26, 2018.

"The CPC hopes to tell the world that China will never forget the assistance and support it has received from states, international organizations, and foreigners during its reform and opening up. China could not have achieved such remarkable goals without their help, and China needs the world to understand this. In the future, China will continue to be friendly to the outside world during this next phase of reform and opening up."