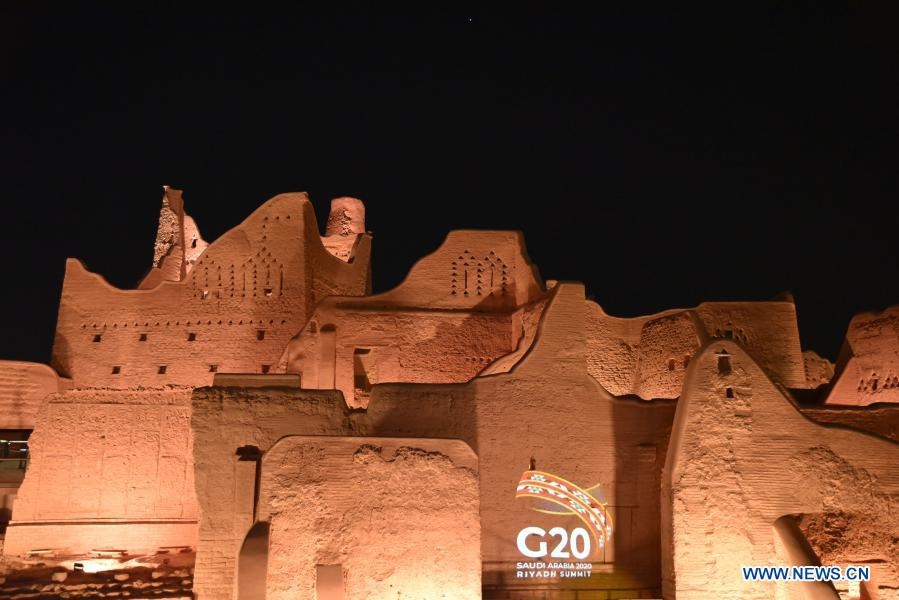 Photo taken on Nov. 20, 2020 shows the logo of Group of Twenty (G20) being projected at a historic site in Diriyah, on the outskirts of Riyadh, Saudi Arabia.  (Xinhua/Tu Yifan)

The G20 is expected to endorse a plan to extend a debt-servicing moratorium for poor and highly indebted economies in the developing world by six months to mid-2021, said a draft G20 communique, as the coronavirus pandemic has hit the most vulnerable nations in the world hardest.

China, as the largest developing country and an emerging creditor, has vowed to maintain support for the developing world and help it overcome the hardships and the growing challenges caused by the pandemic.

Chinese President Xi Jinping, in remarks at the 15th G20 Leaders' Summit on Saturday, said that "China has fully implemented the Debt Service Suspension Initiative (DSSI) and put off debt repayment totaling over $1.3 billion. China supports the decision on the DSSI extension and will continue to work with other parties for its full implementation."

The country will increase the level of debt suspension and relief for countries facing particular difficulties and encourage its financial institutions to provide new financing support on a voluntary basis and according to market principles, Xi said.

The DSSI and the Common Framework for Debt Treatments beyond the DSSI are important deliverables of the G20 Finance Track this year amid the COVID-19 pandemic.

It is the first time in the G20's history that countries have jointly participated in multilateral debt treatments, and China has played a vital role.

During a recent written interview, Chinese Finance Minister Liu Kun said that China has suspended debt owed by developing countries in the amount of $1.353 billion, with 23 countries benefiting from the initiative. As of the end of September, the China Development Bank had signed agreements with DSSI beneficiaries involving $748 million.

The combined debt relief scale is the highest among the group's members in terms of the amount deferred, according to Liu.

"China will stay in close communication and coordination with other parties within the G20 over the issue of debt vulnerabilities in the poorest countries, and we will continue to participate, in an active manner, in the multilateral debt coordination process," he said.

There's no doubt that the China-proposed initiative is like "warm fire on a cold day" for many developing countries that have been struggling in the COVID-19 pandemic, Ruan Zongze, executive vice president and senior research fellow at the China Institute of International Studies, told the Global Times on Sunday.

G20 was born to cope with risks, Ruan said, noting that in the face of a new wave of economic recession and risks, the forum, with the participation of the world's major developed economies, is the best platform to promote the implementation of debt relief proposals for those that are more financially vulnerable.

Experts noted that China has also been a bridge in talks between developing economies and developed ones in the G20 meeting, so the initiative is in line with China's long-lasting commitment to pushing multilateral and inclusive cooperation.

When China hosted the 11th G20 Summit in 2016, a record number of developing countries were invited to the meeting, which brought the developing world's engagement in global governance to an unprecedented high.

"In terms of debt problems, all countries are in the same boat," Ruan noted, adding that for developed economies, to relieve the debt burden of developing countries is also a favor to themselves and the rapid development of the global economy.

Nevertheless, debt relief work still needs the active participation of all parties involved, as for debt problems and support to developing countries, especially those who are still in poverty, "we can never say we've done enough," Ruan said.

The COVID-19 pandemic has intensified uncertainties for the developing world. According to the UN Conference on Trade and Development, COVID-19 is wrecking the UN's 2030 sustainable development agenda.

It reads: "The disparities caused by the COVID-19 crisis are glaring, and vaccine production and delivery will likely underscore the limited capacity of most developing and least-developed countries to respond to the crisis."

To assist developing countries in fighting the pandemic and achieving economic and social recovery and development, Liu said China will do its best through bilateral and multilateral channels, including providing $2 billion in international assistance over two years, and prioritizing the offer of a vaccine against COVID-19 when it becomes available to developing countries.

"With the lack of mature infrastructure such as online education and rich medical resources, the developing world is suffering from a huge crisis caused by COVID-19. Moreover, there is a trend for some developed countries to reduce their foreign aid as their economies are badly hit and for unilateralism and protectionism to rise," Song Wei, deputy director of the Institute of International Development Cooperation at the Chinese Academy of International Trade and Economic Cooperation, told the Global Times.

"But the key to solving debt issues for developing countries is development," Song said, adding that China will always support the development of those countries and increase the efficiency of its aid.