CHINA China balances market supply and demand amid the epidemic

China balances market supply and demand amid the epidemic

Relevant Chinese government departments are taking a slew of measures to balance market supply and demand, and to generate internal growth momentum, as there is an increase in positive momentum in terms of epidemic control nationwide. 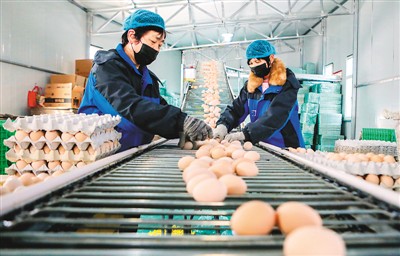 China has ensured the supply of key agricultural products such as meat, oil, eggs and milk.

“China had allocated six rounds of the release of frozen pork from the central reserves since the Spring Festival holiday, and it will release a new batch of frozen meat this week,” said Peng Shaozong, an official of the National Development and Reform Commission.

The official added that local governments have also used every feasible means to increase the supply of the staple meat.

The country is also taking multiple measures, including encouragement of production and supply of alternatives like poultry, and increasing meat imports to meet people’s demand.

Wang Bin, an official with the Ministry of Commerce, said recently that over 90 percent of large wholesale markets for agricultural products, supermarkets, chain stores, e-commerce platforms and express delivery companies have all resumed work.

Meanwhile, new consumption and retail models, including unmanned retail and live-streaming, are gaining momentum, while emerging sectors such as telemedicine and artificial intelligence are growing despite the headwinds of the epidemic, according to the official.

In addition, new consumption models such as digital tourism, online entertainment and short videos are also burgeoning, according to Gao Zheng, head of the industrial development department of the Ministry of Culture and Tourism.

Gao said museums across the country are moving more than 2,000 exhibitions online, attracting over 5 billion visits during the Spring Festival. In contrast, VR technology has brought tourists at home to a number of 5A-class scenic spots.

Experts noted that more balanced supply and demand will help ensure a stable performance of the Chinese economy.