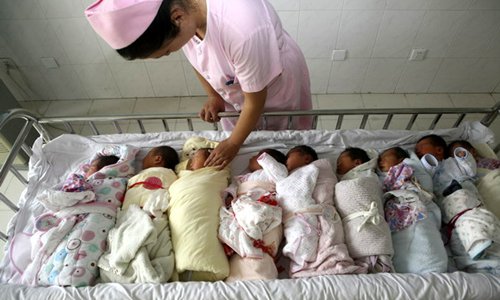 A nurse takes care of newborns at No. 1 People's Hospital in Xiangyang, Hubei Province. (Photo: Xinhua)

Chinese demographers said that the number of newborns in 2018, the third year after the country has fully implemented the two-child policy, may have dropped by more than 2 million and the country's birth population will continue to fall. "Although the national data for the birth of newborns have not been publicized yet, data revealed by local health departments showed that the number of newborns in 2018 decreased by at least 15 percent from the previous year," He Yafu, a demographer and author of a book on the impact of China's population policy, told the Global Times on Tuesday. "The birth population in 2017 was 17.23 million. Based on current calculations, the number of newborns across the nation might drop by more than 2 million," He predicted. He said the birth population in 2018 may fall below 15 million people, citing a source close to the National Health Commission. Yi Fuxian, a research fellow at the University of Wisconsin-Madison, and Su Jian, director of the National Center for Economic Research at Peking University, also told the Global Times that the figures for the number of newborns in 2018 would decrease by more than 2 million, which failed to meet the health authority's expectation. After China implemented the comprehensive two-child policy that allows all couples to have two children - abandoning its decades-long one-child policy - in 2016, the country's top health authority predicted that the fertility rate in 2017 and 2018 would be 1.97 and 2.09, which predicted that the number of newborns in 2018 would be 790,000 people more than 2017. The change was manifested evidently in East China's Shandong, the province with the country's highest fertility rate in 2017. For example, the number of newborns in Yantai in the first half of 2018 was 26,902, a decrease of 16 percent from the same period last year, according to the city's health department. Even higher drops were seen in other cities like Qingdao and Weifang in Shandong Province.Separately, other provinces like Jiangsu, Guizhou and Hubei also witnessed a drop in the number of newborns in the first half of 2018, news site 21jingji.com reported. The number of women between the ages of 20 and 39 is expected to drop by more than 39 million over the next decade, He said. "Without the introduction of measures to encourage fertility, China's population will fall drastically in the future."Zhai Zhenwu, president of the China Population Association, told media in October that the number of people born will continue to fall in 2018 as well as over the next few years."The year of 2018 was the turning point of China's population structure, which witnessed a negative growth for the first time," Yi predicted. He said that the newborns in 2018 were 10.31 million people while the death population was 11.58 million, using his own data.  However, some experts believe that China's second child policy has helped stabilize the birth rate. The number of second children born accounted for about half of all births in China, according to media reports.