China blasts 'provocative actions' by US 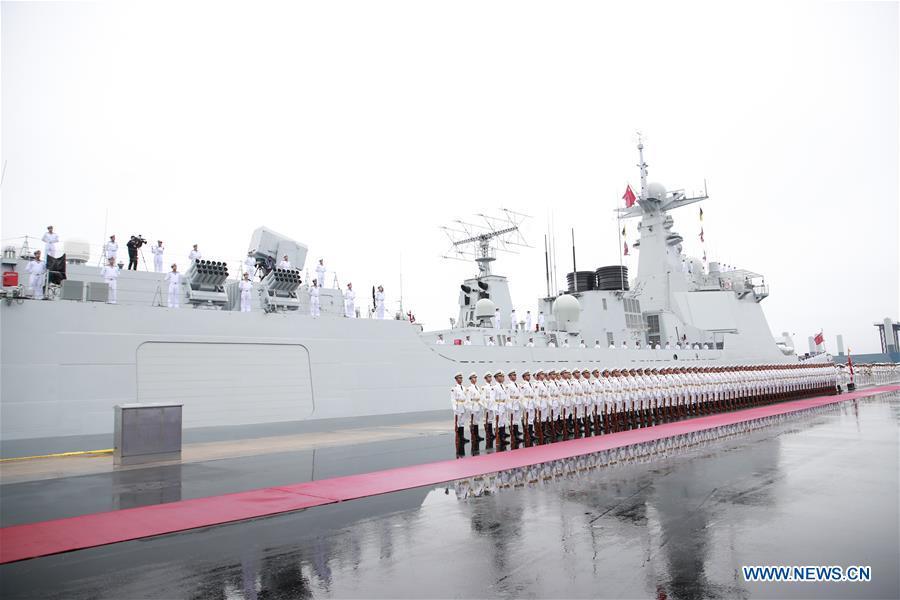 The honor guards of the Chinese People's Liberation Army (PLA) Navy stand in formation before a naval parade staged to mark the 70th founding anniversary of the PLA Navy at a pier in Qingdao, East China's Shandong province, on April 23, 2019. [Photo/Xinhua]

On Feb 27, while the PLA naval fleet was conducting a routine drill in international waters, a US P-8A surveillance plane ignored numerous warnings from the Chinese and closely spied on the Chinese fleet for over four hours, Ren said.

"The closest distance between the Chinese ship and plane was only 400 meters," he said. "The dangerous maneuvers by the US plane were extremely inappropriate, unprofessional and unsafe."

For years, the US has been spying in China's marine and air space as well as near PLA ships and aircraft, which has led to many close encounters and tense moments, he said.

"The provocative actions by the US has damaged China's security interests and has endangered the lives of front-line soldiers and their equipment," he said. "They constitute a serious violation of international laws on freedom of navigation and are the root cause of problems between China and the US on maritime security.

"Yet the US not only ignores their wrongdoings but has also launched complaints and baseless accusations. We resolutely oppose these actions," he added. "We urge the US to stop such dangerous provocations, to stop smearing China and to avoid damaging military relations and bilateral ties."

Earlier this month, both foreign and domestic media reported US ships and naval planes had conducted numerous exercises and operations in the South China Sea, drawing condemnation from Ren and the Chinese military.

"It uses freedom of navigation as an excuse to barge recklessly into the region, threaten national security of nearby countries and disrupt regional peace and stability."

When commenting on recent reports that hacker group APT-C-39 from the US Central Intelligence Agency has been infiltrating Chinese companies and research institutions for 11 years, Ren said the US must stop conducting such activities against China.

"For years, the US has violated international laws and basic principles of international relations to carry out massive, organized, indiscriminate operations of online theft, as well as surveillance and attacks on foreign governments, companies and individuals," he said.

Ren also discussed the relationship between the US and Taiwan, saying recent actions by the US have seriously interfered with China's domestic affairs, damaged cross-Straits peace and stability and "seriously poisoned the two nations' military relations and bilateral ties".

On March 25, the destroyer USS McCampbell sailed through the Taiwan Straits. Ren deemed the action very dangerous and said it sent the wrong message to Taiwan secessionists.

The US also passed the TAIPEI Act this month, which promises more official interactions and diplomatic support for the island's international presence.

"We will absolutely not allow any foreign forces to play the Taiwan card, and will not tolerate any attempts of secession," Ren said. "The PLA has the will, confidence and capability to thwart all secession efforts and safeguard the nation's sovereignty and territorial integrity."