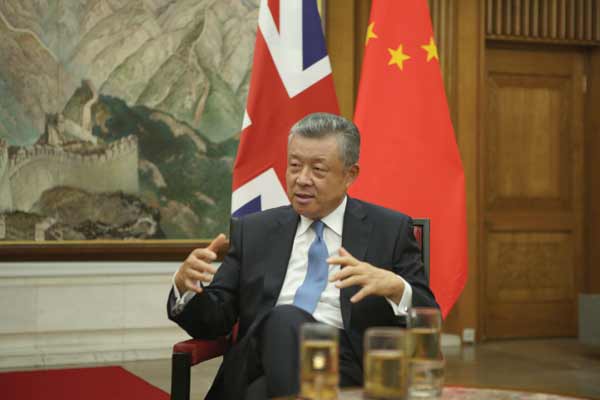 China and Britain differ in social system, history, culture and development stage, but both have created time-honoured civilization and splendid culture, said the Chinese diplomat, stressing that the two countries should strengthen cooperation as the world is undergoing profound changes unseen in a century.

"Exchanges between different civilizations lead to progress, so nations should learn from each other and learn to co-exist, " he said.

He hailed the importance of cooperation between Philharmonia Orchestra and Wuliangye, which brings Western music to the Chinese people and helps Western people learn more about the culture of Chinese liquor, saying their partnership is the best exemplar of win-win cooperation.

"Your cooperation opens a window for more and more people to experience the charm of the Chinese civilization. I hope this will in turn encourage mutual learning between China and the UK, and contribute to the enrichment of both our cultures."

Liu said he is glad to see that in recent years, Philharmonia Orchestra has incorporated more and more Chinese elements and is the only British orchestra that has held concerts in celebration of the Chinese New Year for three years in a row.

As China deepens reform and opens up wider in the years ahead, there will be more opportunities for Britain, he said.

"Two immediate opportunities are the second Belt and Road Forum for International Cooperation and the second China International Import Expo.I hope that British friends from all walks of life will take an active part, seize the opportunities and join hands with China to achieve common development," said the diplomat, adding that people from the two countries should join hands to make sure that the China-Britain "Golden Era" go steady and go far.