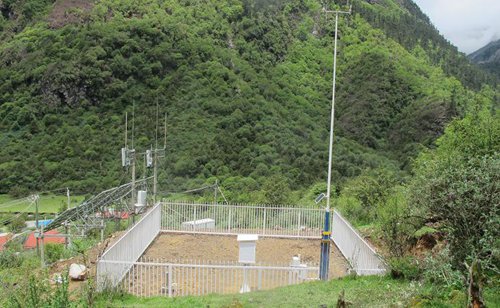 China has set up an unmanned automatic weather observation station near the Indian border in the Tibet Autonomous Region to provide meteorological support to national defense.
The station in Yumai township under Lhunze county of Shannan Prefecture in Tibet will eliminate a blind area of meteorological services. It will also provide strong meteorological support for national defense and further promote border development as well as military-civilian integration, according to a statement on the official website of the Tibet weather bureau.
"The station can observe six factors, including air temperature, air pressure, wind speed, wind direction, humidity and precipitation, with more accuracy than before," Tashi Norbu, a technician in charge of the station, told the Global Times on Monday.
"Yumai is at the border. The station could provide data to help with transportation and communication in national defense. It could also offer support during regional live-fire conflicts," Tashi said.
With nine households and 32 residents, Yumai is China's smallest township in terms of population.
Yumai is located in the southern foothills of the Himalayas and affected by the monsoon climate of the Indian Ocean.
"In the past, we could not accurately grasp the meteorological data of Yumai. It has caused inconvenience for residents' life and in disaster prevention and reduction," Dawa, the secretary of the Communist Party at Yumai, told the Xinhua News Agency.
The construction of the station began in early 2018. However, due to atrocious weather in the area, the construction was completed in June and the first weather data was transmitted from the station on June 22.
Regional weather is an important factor that could influence the take-off and landing of aircraft and the launch of missiles during a battle. The small weather observation station could provide such information, Song Zhongping, a military expert, told the Global Times on Monday.
Grasping accurate weather information could help seize good opportunities in the battles, Song added.
"Residents will enjoy better meteorological services to better safeguard every blade of grass and tree on the territory of the motherland," Dawa said.