Chinese State Councilor and Foreign Minister Wang Yi said on Wednesday that the top priority on the Libya issue is to promote a comprehensive ceasefire and stop the violence, calling on all parties to return to dialogue.

Wang attended a high-level public video conference of the United Nations (UN) Security Council on Libya and propounded four ideas to help Libya to restore peace.
First, he defended the need to promote a comprehensive ceasefire and stop violence. Wang said that China called for an immediate cessation of hostilities of all parties in Libya and urged all countries to effectively implement Security Council resolutions.
Second, Wang urged all parties to maintain the direction of political settlement, which is the only solution, by having all sides returning to the right track on dialogue, adhering to the principle of Libyan-led and Libyan-owned, supporting the UN as a main channel of mediation, and giving full play to the role of regional organizations, such as the Arab League and the African Union. 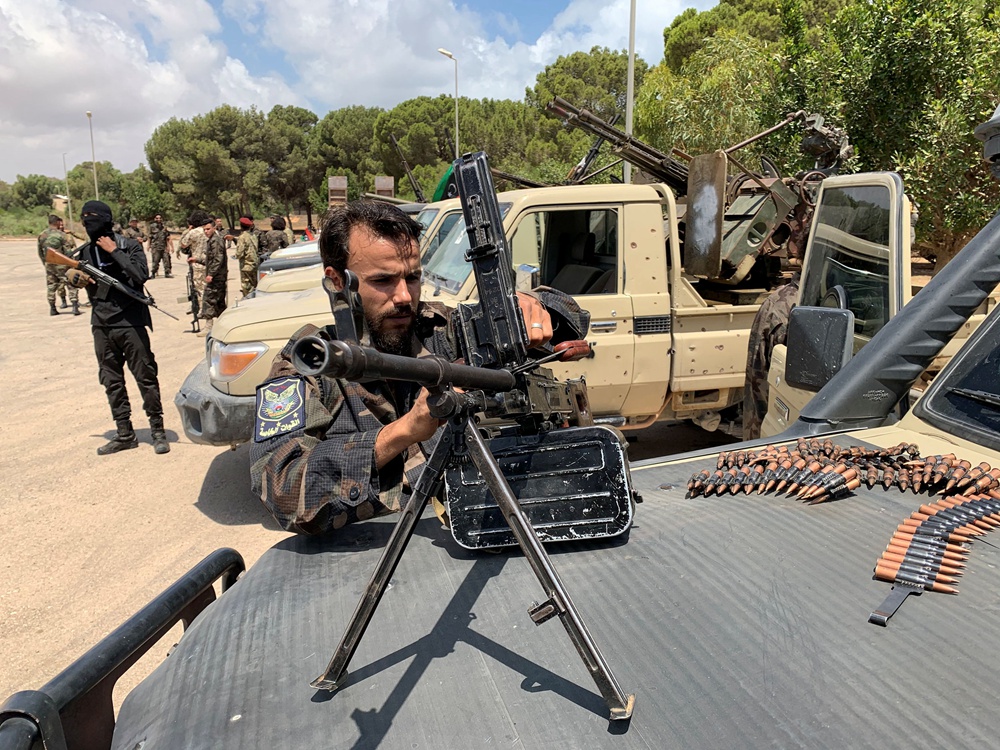 A member of the troops of loyal to Libya's internationally recognized government prepares himself before heading to Sirte, in Tripoli, Libya, July 6, 2020. (Photos: CGTN)

Third, Wang noted that the spillover effects of the Libya crisis must be eliminated in order to prevent Libya from becoming a breeding soil for terrorism.
Fourth, the Foreign Minister urged all parties to uphold the purposes and principles of the UN Charter, adding that this is an important prerequisite for the Security Council to effectively fulfill its duty and a forceful guarantee to safeguard international peace and security.
China has always taken an objective and fair stand on the Libya issue and insists on a political resolution of the Libya issue led by the UN, Wang said, adding that China is ready to work with all sides to help Libyan people embrace the dawn of peace and embark on the road of development. 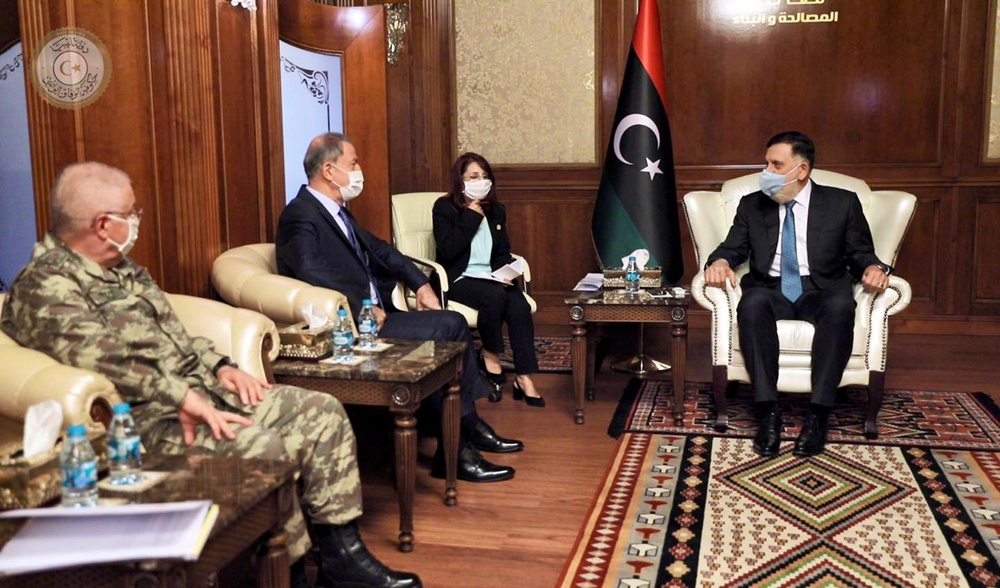 UN Secretary-General Antonio Guterres said at the conference that foreign interference in the Libya conflict has reached "unprecedented levels."
"The conflict has entered a new phase with foreign interference reaching unprecedented levels, including in the delivery of sophisticated equipment and the number of mercenaries involved in the fighting," he said.

Guterres expressed particular concern about the military forces massing around the city of Sirte, halfway between Tripoli in the west and Benghazi in the east.

Forces loyal to Libya's internationally recognized Government of National Accord (GNA), "with significant external support, continued their advance eastward" and are 25 kilometers west of Sirte, Guterres said.
GNA units had tried twice before to seize the city, he noted.
The unity government, with Turkey's backing, is battling forces loyal to strongman Khalifa Haftar, who has support from Egypt, Russia and the United Arab Emirates. 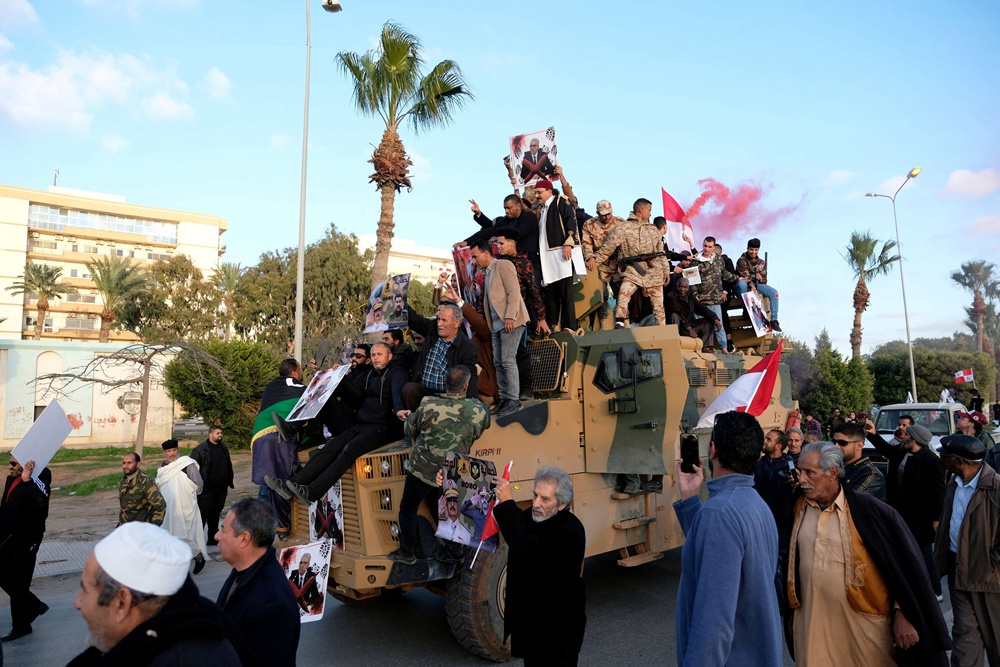 Supporters of the LNA commanded by Khalifa Haftar celebrate on top of a Turkish military armored vehicle, which the LNA said they confiscated during Tripoli clashes, in Benghazi, Libya, January 28, 2020.

"We are very concerned about the alarming military build-up around the city, and the high-level of direct foreign interference in the conflict in violation of the UN arms embargo, UN Security Council resolutions, and commitments made by member states in Berlin" in January, Guterres said.
With battle lines shifting, foreign interference growing, thousands fleeing their homes and COVID-19 cases on the rise, time is running out for bringing a peaceful end to the conflict, Guterres warned.
"Time is not on our side in Libya," he said, urging the international community to seize every opportunity to unblock the political stalemate.
Libya has been locked in a civil war since the ouster and killing of former leader Muammar Gaddafi in 2011. The situation escalated in 2014, splitting power between two rival governments: the UN-backed GNA based in the capital Tripoli and a government in the northeastern city of Tobruk allied with the Haftar-led Libyan National Army (LNA).
LNA forces launched an offensive to capture Tripoli last year, but the siege collapsed in early June and GNA troops pushed further east. The fighting has been at a stalemate around Sirte for nearly a month.
Almost 30,000 people have been forced to flee their homes due to continuing fighting in Tripoli's southern suburbs, bringing the total of internally displaced persons in Libya to more than 400,000, he said.
Between April 1 and June 30, the UN Support Mission in Libya (UNSMIL) documented at least 356 casualties, including 102 civilian deaths and 254 civilian injuries – a 172 percent increase compared to the January-to-March period.