CHINA China calls for probe of all race-based genocide by the US, Western countries

China calls for probe of all race-based genocide by the US, Western countries 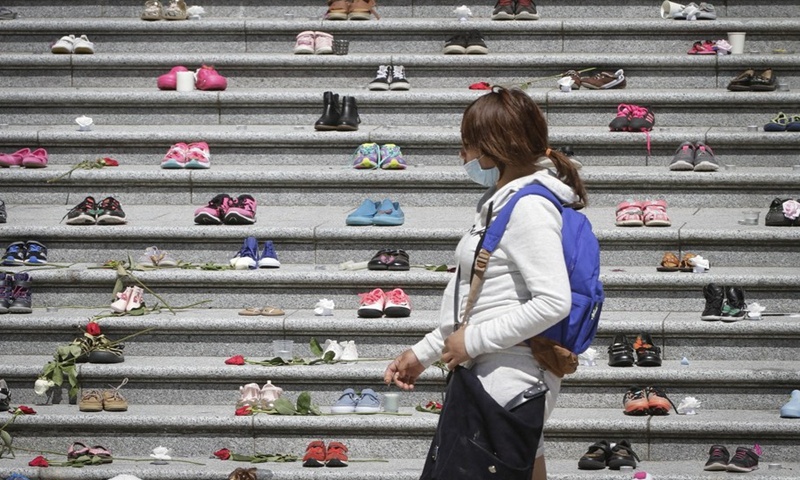 Children's shoes are placed on the staircase outside Vancouver Art Gallery during a memorial event for the 215 children whose remains have been found buried at a former Kamloops residential school in Vancouver, British Columbia, Canada, May 29, 2021. (Photo: Xinhua)

The international community has the responsibility to thoroughly investigate all genocide crimes fairly and deeply to avoid impunity and root out genocide's evil legacy of racism and discrimination, Jiang Duan, minister of the Chinese mission to the UN in Geneva, said in a speech on race-based genocide in the US and Canada at the 47th session of the United Nations Human Rights Council on Monday.

At an interactive dialogue on "Prevention of Genocide," Jiang said that genocide is a serious crime recognized by the international community and has brought misery to human beings, with its effects felt to this day, Jiang said, noting that the US had committed massive killing of Indians in nearly 100 years after its founding.

The population of American Indians in the US sharply decreased from 5 million at the end of the 15th century to 250,000 in the 20th century.

Jiang also noted that Canada sent 150,000 indigenous children to "residential schools" to assimilate them and 3,200 children were tortured to death. This is only the tip of the iceberg of Canada's genocide to indigenous people, Jiang said.

The minister noted that other Western countries have committed serious race genocide and crimes against humanity during the colonization and invasion of other countries.

Jiang called for a thorough investigation of all genocide crimes fairly and deeply to avoid impunity and root out genocide's evil legacy of racism and discrimination.