BEIJING, Oct. 20 (Xinhua) -- A foreign ministry spokesperson on Tuesday said China hopes India can honor its commitment on losing no time in returning a Chinese soldier who recently got lost in the border area. 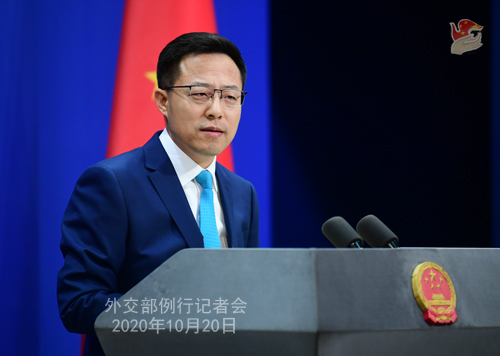 Spokesperson Zhao Lijian made the remarks in response to a related query about the soldier who went astray when he was helping herders at their request to search for yaks late Sunday.

Chinese border defense troops immediately informed the Indian side of the incident and expressed the hope that India would lend a helping hand in the search and rescue efforts, Zhao said.

He said the Indian side had agreed to offer support and pledged to promptly return the aforementioned individual to China once he was found.

India recently informed China that the missing individual had been found and would be returned after undergoing a medical checkup, he added.

"We hope the Indian side can honor its commitment and lose no time in returning the person, and work with China in jointly facilitating the implementation of the consensus reached at the 7th round of commander-level talks, as well as safeguarding peace and tranquility at the border area," Zhao added.